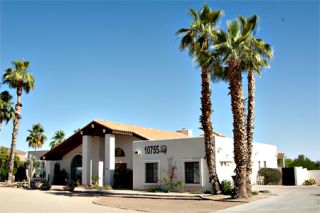 The latest example of the decentralization of broadcast television production is nestled on a 1-acre lot behind 10755 East Cactus Road in Scottsdale, AZ. It includes a full-service HD broadcast studio facility, but its key feature is a high-speed fiber video hub that can connect directly to any broadcast channel or network in New York City.

With an investment of about $500,000, BroadcastAZ has built two complete HD studios in a 2000sq-ft space, which is available around the clock and allows a commentator or news source to go on camera at 3 a.m. local time for morning news shows in New York at 6 a.m.

A robotically controlled HD-camera with a lighting and sound system in Studio A is used for “talking head” or “live-shot” interviews, plus a green room/make-up room for talent. Studio B, at 1200sq feet, is suitable for up to a five-camera shoot with either green screen or custom set construction. The production studios include Teleprompters, computer-controlled lighting grid and control room.

“We wanted a state-of-art studio facility that also offered not only privacy for our VIP guests but also a relaxed atmosphere which includes a well-appointed green room, makeup area and outside a Venetian-glass-lined swimming pool and outdoor patio,” said Bonnie Adams, director of operations. “We have trained production staff at the facility 24/7 because our work day often begins very early in the morning. Breaking news won’t wait for your morning coffee.”

What makes BroadcastAZ special is the direct fiber connection to New York City.

“With a 70ms delay, our connectivity is unsurpassed in delivering an HD video broadcast direct to our Network Operations Center in New York City,” said Scott Siegwald, director of technology for BroadcastAZ. “All our equipment is capable of both studio operation and also robotic control at remote terminals. It is the same technology being used by Major League Baseball and the NFL Network for live shots throughout the country.”

BroadcastAZ is capable of televising live HD, anamorphic HD or SD signals to the Azzurro HD Hub in New York City. The signal is then available to more than 200 major networks including ABC, CBS, NBC, Fox, CNN, ESPN and global networks as well.