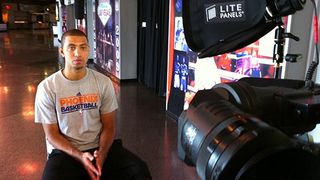 When Dan Friedman, director of photography for the International Basketball Federation (FIBA), saw the many locations he was going to have to shoot in during the London Summer Games, he knew his Litepanels LED Sola ENG 3-light Flight Kit would make the trip with him.

“The whole LED lighting system has a lot of flexibility,” said Friedman. “We were able to set up three-light interviews at our hotel in ambient light dominated by tungsten, move to the daylight-lit basketball venue for a whole day of interviews, and then grab on-the-fly interviews ENG sun gun style. With the ability to focus and dim each of the Sola ENG fixtures, I could match the intensity to whatever ambient situation we found ourselves in.”

Power was no problem for Friedman. The Sola ENGs allowed him to operate off 230VAC sockets, Anton/Bauer Dionic battery packs or his camera’s battery for run-and-gun situations. “The Sola ENG LED fixtures draw so little power (30W max), we were able to run for a couple of hours straight off each Dionic battery pack.

“In the Mix Zone, where athletes would gather for interviews immediately following their games, the ambient light was very inconsistent. A lot of times there wasn’t enough available light, so you had to augment. The Sola ENG was perfect because I could make it as soft as I wanted, and could dim it to where it gave a natural look as it filled in the face. Other times we found ourselves in an area where we were in a total shadow with a bright background. I could pump in enough light from the fixture to match our subject to the background.”

Litepanels Sola ENG Flight Kit comes housed in a compact rolling Pelican case that fits in an airliner’s overhead compartment. “It carries the three light fixtures, three stands, all the necessary hardware to mount the lights on stands or on camera, and a variety of filters for color adjustment. And I can roll it right down the aisle to my seat.