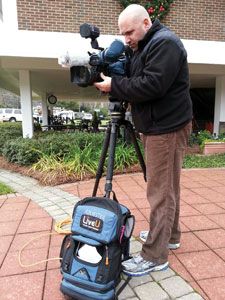 Since IP newsgathering made its initial splash when CNN pioneered the technology for its coverage of the Israel-Hezbollah conflict in 2006, it has steadily gained momentum not just as a go-anywhere way to contribute live and edited pieces from war zones, but also as a reliable path for local stations to contribute stories from the field. When it comes to its place in the newsgathering pecking order of technology, it seems most local broadcasters echo the sentiment of Pete Sockett, director of engineering and operations for WRAL-TV, which serves the Raleigh-Durham-Fayetteville, NC, market.

“IP newsgathering definitely has grown up a lot in the past couple of years,” he says. “It’s a great addition to our toolbox to do news.”

This complementary role for IP newsgathering is understandable. With a $1 billion-plus infrastructure dedicated to supporting traditional point-to-point microwave and satellite contribution as well as a long track record of reliable service, ENG and SNG have claimed for themselves premiere status when it comes to delivering live reports from the field.

However, a few stations are beginning to make IP newsgathering their primary, and in at least one case their only, means of field contribution.

Morris Network, which owns stations in Georgia, Kentucky, Mississippi, North Carolina and Tennessee, is phasing out both ENG and SNG live units in favor of IP newsgathering.

“You take a live unit, satellite or whatever,” says Dean Hinson, president of Morris Network. “There’s travel time, setup time, breakdown time. You have a lot of resources tied up in that arena.” However, the Dejero IP newsgathering system the Morris Network deployed has eliminated that downtime, improved the productivity of its newsgathering crews and extended the reach of its stations’ news coverage, he says.

It would seem such a bold decision may be dangerous. After all, Hurricane Sandy disrupted operation of one-fourth of the cell phone towers in the 10 states affected by the storm, according to the FCC. Del Parks, VP of engineering and operations for the Sinclair Broadcast Group, notes such cell tower disruptions can spell disaster for IP newsgathering.

“If cell service goes down, you have a problem,” he says, “but LiveU (the brand of bonded IP newsgathering system deployed by Sinclair) as an extension of traditional newsgathering puts you in places you couldn’t be.”

Two Sinclair stations deployed IP newsgathering systems during the storm. “They expanded our coverage and put viewers into the storm,” Park says.

Ka-band satellite services, such as Inmarsat’s BGAN and ViaSat’s Excede Newsgathering, provide a way to sidestep disruptions to the cell service. Jim Casabella, director, Advanced Technology, ABC Owned Television Station Group, says roughly one-third of the group’s news crews have some sort of IP newsgathering and that it is looking to supplement them with Ka-band connectivity in the near future.

The bottom line appears to be that IP newsgathering is growing in prominence. Most see it as a supplement to traditional ENG and SNG, but at least one pioneering station group is committing to it entirely. With Ka-band satellite service to supplement cell networks, that approach may be less risky than it seems on the surface.

—Phil Kurz regularly reports on the broadcast industry and is the writer of several Broadcast Engineering’s e-newsletters, including “RF Update.”