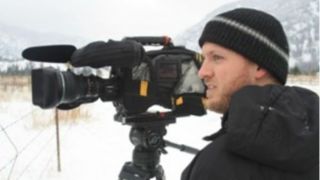 The company has also produced a number of current and past series with these Panasonic cameras, including "Zombie Apocalypse" (upcoming on the Science Channel); past seasons of "Duck Commander" and "Buck Commander" for the Outdoor Channel, as well as that network’s upcoming "Friends of NRA 3"; and "Brotherhood Outdoors" and "Guns and Gold" for the Sportsman Channel.

The company is currently in production for the second season of "Mountain Men," which follows several individuals living in various mountain areas and shows viewers what it is like to live “off-the-grid” in the wild. "Making Monsters," which just concluded its second season and is in pre-production for a third season, profiles Distortion Unlimited’s Ed Edmunds and his staff, who create some of the scariest animatronics and “frightronics” the haunt industry has ever seen.

As Warm Spring Production’s calling card is outdoor programming, it places a serious demand on equipment and requires durable and solid cameras. Solid-state P2 HD has delivered rugged performance for the company for more than four years, with its original investment in the HPX2000s and HVX200s followed by the addition of HPX3100s and HPX370s. The company typically produces several series simultaneously, and the cameras turn quickly from shoot to shoot.

Warm Springs Productions shoots all its flagship series in AVC-Intra 100. "Mountain Men" is shot in 1080/30p, and "Making Monsters," a highly visual show, is shot in 1080/24p.These are both three-camera shows, usually shot with at least two of the larger-imager cameras — the HPX3100 and HPX2000 cut together seamlessly — and one handheld for maneuverability.

The production company takes full advantage of P2’s solid-state, all-weather resilience. The company shot the first eight, one-hour episodes of "Mountain Men" in the mountains of Montana, North Carolina and Alaska, where the crew encountered temperatures as low as -55° F, and routinely dealt with rain, wind and high altitudes.