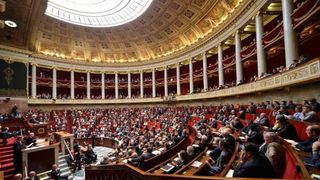 The French National Assembly has deployed Hitachi DK-H100 HDTV box cameras as part of an upgrade to HD.

The new cameras are being used to record the Assembly’s daily sessions at the Palais Bourbon in Paris. All footage is subsequently transmitted over a fiber-optic connection to the master control room, located 1150ft away, for redistribution.

“The (Hitachi) cameras are small and discreet, and we are particularly happy with the outstanding picture quality they provide as well as their handy fiber optic connection,” said Christian Castelli, audiovisual system engineer at the French National Assembly.

With 577 deputies and more than 1000 hours of yearly debates, The French National Assembly is at the heart of the country’s parliamentary democracy, with recorded daily sittings which can often run into the night. The HD recordings from the Hitachi cameras on-site are immediately made available to the LCP-AN parliamentary channel and to the media. France 3, for example, offers live coverage of delegates’ questions to the government in a public service program called “Questions au gouvernement.”

The DK-H100 is a multipurpose HDTV box-type POV camera that is suited for applications such as a graphics stand as well as point of view and remote observation. With a small lightweight head, the camera has a new 2.3 million pixel native 1080i 3-CCD design. Local systems integrator Preview GM System provided the cameras.