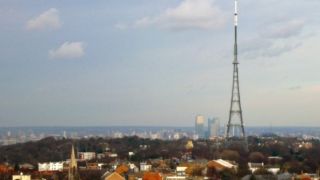 The Freeview digital terrestrial (DTT) platform has launched an advertising campaign to persuade pay TV customers to drop subscriptions, move over and enjoy many of the same channels without charge.

Freeview is attempting to build on its dominant position in the UK where it serves 19.3 million households, compared with just under 15 million for the three main pay TV platforms combined, satellite operator BSkyB, cable co Virgin Media, and hybrid IPTV/DTT provider BT Vision. In the new campaign Freeview cites figures from the Broadcasters’ Audience Research Board (BARB), which measures TV viewing in the UK, ndicating that FTA accounted for 75 percent of all UK viewing hours, also pointing out that 95 percent of the most popular programs were available on the platform.

The Freeview advert includes a 30-second film, made by agency Leo Burnett, featuring red and white helium balloons as a metaphor for the depth of programming available on Freeview, including iconic shows such as "Masterchef," "The Apprentice," "Big Brother" and "The Cube." The film follows the balloons on a journey around an anonymous city, including high rise apartment blocks and restaurants, before reaching their destination at a typical suburban house. There they float through an open window, and we see the glow of a TV screen behind the living room curtains.

Freeview is the brand name for the group of FTA channels available over the UK’s national DTT infrastructure, jointly owned in equal portions by fiveshareholders, the BBC, commercial FTA broadcasters ITV and Channel 4, pay TV operator BSkyB, and national DTT infrastructure provider Arqiva. The campaign against pay TV will not have pleased BSkyB, although it has made no comment so far. But Freeview is not pulling its punches, with Guy North, its Marketing Communications Director, insisting that households can make big savings by dumping their pay TV providers.

“Many household’s budgets are increasingly stretched this year, and so we’re highlighting how people can save money with an alternative to pay TV,” said North. “We want consumers to question the wisdom of expensive TV subscriptions and whether or not a pay TV package is really right for them, given that much of what they watch is free-to-air anyway. Freeview provides many of the benefits of Pay TV platforms, such as the ability to record programs with Freeview+, and four HD channels that viewers can access. For many consumers, Freeview really is the smart choice.”

What North did not say was that while Freeview may provide 95 percent of the most popular programming, it is the other 5 percent that persuades people to subscribe to pay TV. That includes premium movies and sport, notably the English Premier League football but also cricket, some grand slam tennis, and formula one racing. BSkyB’s sports channels are available over Freeview, but for those subscribers do have to pay, and the price tends to be higher than a direct pay TV subscription. The same applies to movies, with BSkyB offering 12 dedicated film channels and a range of early window premium material, while Freeview just has a scattering of offerings.

Freeview also lags behind in terms of set box or DVR functionality, with less sophisticated search and content discovery. Nevertheless, offering all the top FTA channels, Freeview’s bullish anti pay TV campaign will be followed with interest elsewhere in Europe, where FTA services are available but have generally been less well organized and attracted fewer subscribers than in the UK. In Germany for example DTT FTA viewing only accounts for 5 percent of commercial broadcaster RTL’s audience. Given such low numbers and uncertainty over the future of DTT in the country, RTL recently announced it was ceasing transmission over DTT. Many FTA services in Germany are regional rather than national.

In France FTA DTT is expanding, but with doubts over the sustainability of funding. Six new FTA channels were launched December 2012, backed by leading private broadcasters TF1 and M6, with the objective of broadening the mix of genres represented on DTT. But as analysts IHS Screen Digest pointed out, this is coming at a time when advertising revenue, upon which these channels will depend, is in decline.

In the UK, under a different model supported through a combination of advertising, subscription and license fee income as well as effective government support, Freeview is not so susceptible to economic vicissitudes.