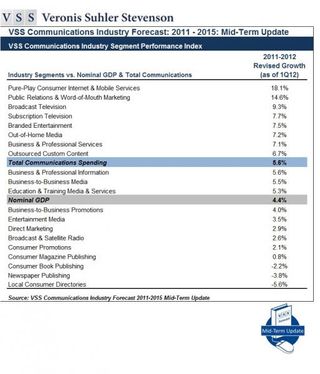 Overall revenue on broadcast television will increase 9.2 percent to $52.95 billion in 2012, seeing both increases in advertising and double-digit retransmission increases, said a new report by the investment firm, Veronis Suhler Stevenson (VSS).

Broadcast TV advertising will grow 6.5 percent in 2012 to $44.71 billion, thanks to the Olympics and presidential elections, said VSS. Ad spending for broadcasting is expected to increase 2.5 percent from 2011 to 2016.

Spending within the entire U.S. communications industry will increase 5.2 percent in 2012 to reach $1.189 trillion as consumers and businesses increasingly embrace digital technology and return to spending levels not seen since before the recent worldwide economic downturn, according to the VSS forecast.

The report said that revenue for subscription television has increased with more bundled services and major advertisers moving their ads from the broadcast networks to lower cost cable networks.