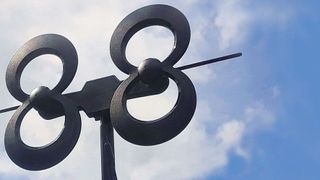 COVID-19 has slowed, but not stopped, the transition to ATSC 3.0. Work continues in the ATSC to refine the standard and stations and corporations like Public Media Group and broadcaster groups like Pearl TV are readying plans to deploy. “Safe-at-home” regulations have led to huge increases in ratings for local TV stations, particularly news. People are (re)discovering broadcast TV.

I’d like to make the argument that while we’re building out ATSC 3.0, viewers shouldn’t ignore ATSC 1.0. One thing I’m finding when I talk to people about ATSC 3.0 (Pearl and ATSC have done a good job marketing it as “NextGen TV”), is that there is much hope (or, for some, fear) that ATSC 3.0 will make broadcast TV programming available for free to everyone who buys a small antenna. They might even get free 4K UHD. Ads like the one in Fig. 1 show how crazy some of the claims are. Search Google for “4K UHD Antenna” (without quotes) and see what comes up.

What’s wrong with this picture? While over-the-air 4K UHD isn’t available now except for a few test broadcasts, and that magic antenna won’t bring in signals from 980 miles away, for most people it isn’t that hard to get the major networks in full HD and a variety of specialty channels in SD right now with ATSC 1.0. There are even ways to stream it from an antenna to an app on your TV or portable device or record it for later viewing.

If you don’t want to bother with antennas for every device, putting the broadcast signals on your home network will allow viewing on any connected device. The antenna and box can also be placed in a location where the signals are best, even if the TV isn’t there.

The HD Homerun units from Silicon Dust have been around a while and can be equipped with up to four tuners for simultaneous reception of different channels on different devices. Prices start at $99 for two tuners and go up from there for more tuners, transcoding and DVR capability. Channel Master’s Stream+ has two tuners and includes Google Play for streaming services for $99. Also for $99 is Hauppauge’s CordCutter TV, which includes two tuners and transcodes broadcast MPEG-2 video to H.264 at lower bitrate for less strain on the home network; however it doesn’t have a built-in DVR option. All of these devices should work with Android, FireTV, Windows, Apple TV or iOS apps.

These devices and TV sets will need an antenna. For many people a simple antenna like the Onn ONA19CH002 I found at Walmart for under $20 will bring in most local channels with a little effort. People who’ve always had their TV set hooked to a cable connection in the wall often don’t realize this. While a proper antenna is best, for a quick check in strong signal areas take an unfolded paper clip (one without plastic coating); push one end into the antenna connector on the back of a TV set; select “antenna” and rescan. You may be surprised how many stations you get.

What does a TV station’s coverage look like if we assume an indoor antenna? Fig. 2 shows a plot of predicted signal strength for WRC-TV in Washington, D.C. The green area is where the field strength is predicted to be 88 dBµV/m or stronger, at least 40 dB stronger than the FCC required “community grade” signal for a UHF DTV station. This extra margin will, in many cases, offset signal loss from walls and signals received as a reflection off other buildings. This coverage prediction doesn’t take into account that buildings and foliage can add loss, but on average a simple indoor antenna should work for most people in the green area. Reception outside the green area may require a bit more fiddling with the antenna or moving it to a higher location in the house or even outside.

Now lets see what indoor coverage would look like if WRC-TV converts to ATSC 3.0 using the same power and antenna. The most likely coverage scenario while stations are broadcasting in both ATSC 1.0 and ATSC 3.0 will still be the green area in Fig. 2. Why no difference? The required signal-to-noise ratio (SNR) for the ATSC 3.0 signal is likely to be the same (15 dB) as that for ATSC 1.0, or even a bit worse. The SNR won’t be any better because bits (data rate) would have to be sacrificed to make the signal more robust.

This could be done if the ATSC 3.0 station were carrying the same content as one 1.0 station, but initially there will be far fewer 3.0 stations than 1.0 stations and those 3.0 stations will likely be carrying programming from multiple 1.0 stations. I covered that scenario years ago in my July 2015 column “Getting Ready for ATSC 3.0.” Even with the greater efficiency of HEVC video coding, bits are going to be precious. ATSC 3.0 will have some advantage in areas with multipath making antenna placement less critical and reception somewhat easier.

There will be trade offs between the number of stations available on ATSC 3.0, the resolution of their video (4K, 1080p, 720p, HDR?) and the robustness of the signal. Some broadcasters may decide to up the data rate even if it results in less coverage than ATSC 1.0.

What’s the lesson for viewers? If you want to receive high-resolution ATSC 3.0 in the future, check 1.0 reception now.

One advantage ATSC 3.0 offers broadcasters is the ability to protect content, just as cable companies and streaming services do now. Premium services can be offered for a price (a subscription fee or registration) and recording blocked. This will ensure quality content is still available over the air, but it also means that with ATSC 3.0’s security features we’ll likely lose the ability to record some (most?) shows over the air, store them forever on a hard drive or DVD and watch them later on any device. With ATSC 1.0, there are no technical limits on what a person can do with the content recorded from over the air broadcasts, even in full HD.

The lack of a robust ATSC 3.0 signal for early adopters may be disappointing, but the standard does offer techniques for more robust coverage as more stations convert to 3.0. One is to add transmitters in a distributed transmission system (DTS)—also referred to as “single frequency networks”—which increases signal strength to viewers making reception easier without the need to reduce data rates (expanding the green area in Fig. 2 to the entire market). However, building out a DTS is expensive. Other methods steal some data capacity (TDM or FDM) or power (LDM) from the less robust stream to provide a low bit rate robust stream. See sidebar for details on how these techniques work.

When viewers ask me for help receiving ATSC 1.0, they usually have some signal, but it has artifacts and dropouts. Adding robustness by either increasing signal strength or reducing the required SNR, as described in the sidebar, would provide a great improvement in reception. The blue area in Fig. 2 shows the increase in indoor service area achieved by reducing the required SNR to 5 dB (at lower bit rate and resolution), compared to the 15 dB SNR scenario. Will broadcasters be able to spare the capacity to transmit a robust stream? How long will it take to find the resources to build out the DTS required to increase the signal level delivered to viewers over a wide area?

While I expect long time readers are already using antennas to pick up ATSC 1.0 broadcasts, if you haven’t tried receiving ATSC 1.0 give it a try; you’ll be prepared when 3.0 makes it to your market and into your TV.  Let me know how it works out! My email is dlung@transmitter.com.