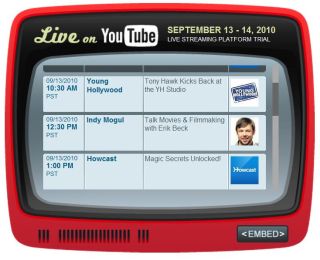 “Today and tomorrow, tune in as we open a new chapter of YouTube live streaming,” YouTube’s Joshua Siegel says on the Web site’s blog. “Starting at 8 a.m. PT, we will begin a limited trial of a new live streaming platform in conjunction with four of our partners: Howcast, Next New Networks, Rocketboom and Young Hollywood.”

The new platform “integrates live streaming directly into YouTube channels; all broadcasters need is a Webcam or external USB/FireWire camera,” he continues. “Included in the test is a ‘Live Comments’ module which lets you engage with the broadcaster and the broader YouTube community. For the purpose of the trial, this offering will only be available today and tomorrow. Based on the results of this initial test, we’ll evaluate rolling out the platform more broadly to our partners worldwide.”

YouTube has offered live events in the past, including a U2 concert and President Barack Obama’s first State of the Union Address, according to AP. Should YouTube launch full-time live video offerings, it would go up against Ustream.tv, Justin.tv, and Livestream.com, all of which already offer living streaming. However, AP notes that Ustream, the live-streaming leader, got 3.2 million unique visitors in July, compared to 143.2 million for YouTube.

The two-day trial will reveal the video quality and server capacity for live streaming.