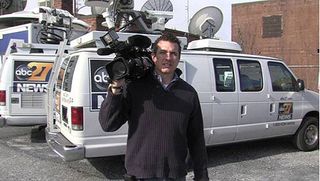 WHTM-TV director of photojournalism Doug Watson shows off one of the station’s new JVC ProHD camcorders, which have been used in the field since June.
WAYNE, NJ–WHTM-TV, the ABC affiliate that serves Harrisburg-Lancaster-Lebanon-York, Penn. (DMA #41), has purchased 15 GY-HM790U and six GY-HM750U ProHD cameras for its transition to local HD news production.

Allbritton Communications Company, in Arlington, Va., recently standardized on JVC ProHD cameras for studio and ENG work at WHTM-TV and five of its affiliated stations. The new cameras are part of an overall transition to local HD news production for all stations in the group.

In May, WHTM-TV began using its new JVC cameras in the studio in SD mode, but transitioned to HD in October. The studio’s three GY-HM790Us are connected via fiber optic cable, which eliminates the need for triax and additional cable bundles.

Each camera is equipped with a CopperHead ProHD KA-F790 fiber optic transceiver, a custom module built by Telecast Fiber Systems that provides a direct connection to the camcorder (no external cables). “The fiber package is compact and well integrated,” said Keith Blaisdell, WHTM-TV director of technology. “Telecast has worked very hard to deliver a robust and reliable fiber solution with the CopperHead.”

Photojournalists began using ProHD camcorders in the field in June, then transitioned from SD to HD in September. “The cameras are simply amazing in their video reproduction. The colors are rich and the resolution is really superb,” Blaisdell said. “Most of all, the total package is both operator and engineer friendly.”

Blaisell said JVC’s native file recording on non-proprietary SDHC cards has been a “perfect match” for the station’s Adobe Premiere NLE workflow. “We made the transition from legacy Digital Betacam tape to nonlinear workflow all at once,” he added. “JVC’s native file recording has worked seamlessly with Adobe Premiere to deliver stunning HD pictures.”