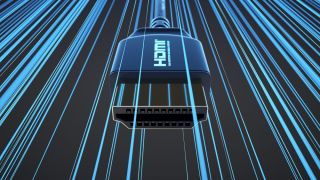 NEW YORK—What is HDMI 2.1? The new standard for HDMI connectors was confirmed back in November 2017, but has yet to trickle down into mass-market television hardware. When it does though, it will mark a big step for both the AV industry and the home viewers wanting to get the most of their TV series, films, broadcasts, and gaming consoles.

When High Definition Multimedia Interface (or HDMI) first arrived on the scene, everyone rejoiced at no longer having to use bulky SCART connectors, or those confusing component video cables, ever again. Instead HDMI offered high definition video with a connector that was just a little bigger than a standard USB plug. Over the years the HDMI standard has seen continuous improvement, with extra features being added as the needs of televisions have changed.

HDMI 2.1 is the next step in that process.

The headline feature here is support for 8K content at 60fps, but there are also a number of minor features that add up to a much more capable standard such as support for Variable Refresh Rates, Dynamic HDR and Quick Media Switching, which should make it faster than ever to change between the devices attached to your television.

Here’s a rundown of everything that’s due to arrive with the new standard:

The new HDMI 2.1 cables will allow faster refresh rates, including 8K resolution video at 60 frames per second and 4K at 120 frames per second—and it’s that second feature that will be the real selling point for gamers and home cinema geeks, at least at first.

“We’ve increased resolutions and frame rates significantly,” Jeff Park, director of marketing at HDMI Licensing, told TechRadar at CES 2017, adding at the time that the Tokyo 2020 Olympic Games were going to be a driver for 8K TV content.

“NHK [Japan’s national public broadcaster] is going to push 8K120 as an actual broadcast stream, and many consumer electronics manufacturers want to hit that target, so we’re laying the pipe to give the industry flexibility. It’s practical stuff.”

Although it’s about keeping HDMI at the bleeding edge, HDMI 2.1 can actually go ever further, supporting resolutions as high as 10K at 120Hz—though that kind of capability is a while away from being supported on commercial sets.

DO I REALLY NEED 8K ANYWAY?

You may be skeptical of whether you even need 8K-capable hardware and connectors. And maybe you don’t: most content you’ll be watching on your TV will be in SDR or HD, and the industry is still adjusting to the flurry of 4K capable sets released to market. Isn’t this all preemptive?

Even if 8K TV isn’t on your radar, though, HDMI is looking ahead to its uses in VR, says Park.

“8K content will have to follow, but it’s not all about linear content these days—it’s about VR,” he told us. “VR is targeting very high resolution and very high frame rates, and one of the targets the industry is talking about for VR applications is 8K at 240 Hz.”

That’s actually not in the HDMI 2.1 spec, but it’s achievable in the next spec, said Park, who thinks it’s even possible that some broadcasters could even skip 4K transmissions entirely and gun straight for 8K. You have been warned.

HDMI 2.1’s Game Mode VRR feature is about anything involving real-time interaction. The VRR stands for Variable Refresh Rate, which means less image lag, stutter and frame tearing similar to the effect achieved by FreeSync and GSync on the PC platform.

This is great news for gamers, because HDMI 2.1 will enable a 3D graphics processor to render and display images in real time, which will result in more fluid gameplay and greater detail.

Once again, this will find its biggest use in the world of VR. “VRR means no lag and a more immersive experience that you need for gaming, whether it’s traditional gaming or a cinematic ‘on the rails’ VR experience,” says Park. “An increase in fi delity is needed to make VR truly immersive.”

While it’s no endgame, HDMI 2.1 will bring convincing VR experiences closer. “But it will have an immediate impact on all gaming applications,” adds Park. “Whether it’s 480p gaming or 8K, it doesn’t matter—you’ll get that immediate feedback and interaction with HDMI 2.1.”

Another feature that will bring big benefi ts for gamers is Quick Frame Transport (QFT), which promises to reduce latency—great news for fast-paced games or online multiplayer.

WHAT IS DYNAMIC HDR?

Given the growing popularity of HDR, HDMI 2.1 bringing Dynamic HDR is perhaps the biggest news for home cinema afi cionados. Essentially it means that the very fi nest values for depth, detail, brightness, contrast and wider color gamuts can be sent to your TV on a much more nuanced basis.

“Today, HDR is done by taking average values for HDR across an entire movie, so while you still get some benefit, it doesn’t apply to each scene perfectly,” says Park. “Dynamic HDR enables the HDR metadata to be applied as precisely as frame by frame, or more practically, scene by scene.”

Frame by frame HDR would be massively time-consuming to produce, but scene by scene is feasible. Either way, HDR is about to be given a whole lot more impact.

It’s not all about TVs, either; soundbars, AV amplifiers and other audio equipment will also benefit from HDMI 2.1—though it will mean upgrading all of your equipment.

For the last few generations, HDMI cables have had an Audio Return Channel (ARC), which means audio can be sent both ways between a TV and audio gear. This essentially enables a display to send its own audio—perhaps from a built-in Netfl ix app—to a soundbar or surround sound system, bypassing its own speakers.

Enhanced Audio Return Channel (eARC) is nothing more than a simple update to keep pace with changes in audio codecs, specifically to include the new object-based audio codecs, Dolby Atmos and DTS:X.

“eARC ups the bandwidth significantly,” says Park. “Previously you were limited to two-channel PCM or legacy Dolby Digital or DTS audio, but with eARC that reverse channel can now support much higher bandwidth audio including Dolby True HD, DTS HD, Dolby Atmos, DTS:X and other object-based audio at much higher bandwidths.”

This is about defining a new specification of a HDMI cable’s speed, with so called 48G cables (for now just a working title) offering 48Gbps bandwidth for sending uncompressed 8K video, with HDR, over a HDMI 2.1 cable.

Ditto the compliance tests that each HDMI 2.1 cable will have to pass in order to be labelled as such. Backwards compatible with earlier versions of the HDMI specification, and able to be used with existing HDMI devices.

WHICH TVS COME WITH HDMI 2.1 ALREADY?

Others are being more generous with their support, with the LG CX OLED featuring four HDMI 2.1 ports—though at 10-bit 4K/120 Hz passthrough rather than the full 12-bit. This shouldn’t really affect your picture onscreen, given that the CX only has a 10-bit panel anyway, though it’s worth noting that there are other LG TVs that support the full 12-bit HDMI, such as the ZX OLED.

Most 4K TVs in 2020 won’t feature HDMI 2.1, though, and it will likely take another couple of years before its usage is more standard. Sony’s brand-new A8H OLED, for one, has no HDMI 2.1 ports, despite Sony’s gaming arm launching the 4K/120HZ-capable PS5 console later this year.