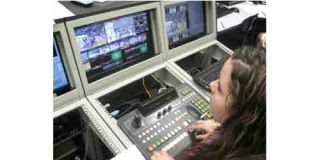 Live sports coverage represents a new challenge for student video production at the school, which has been focused primarily on a weekly newscast. Now in its 14th year, WCTV is a 10-15 minute newscast distributed on an internal cable system and a local community access channel, as well as iTunes and other websites.

When it came time to replace its GlobeCaster switcher and other core SD production equipment, Webster City decided to make the transition to full HD production. Then, according to Mark Murphy, director of technology at Webster City Community Schools, officials decided to expand the video production program by integrating video cameras into the new gym.

The first phase included the purchase of the Granite system, three Canon HD studio cameras and other equipment for the 2010 school year from integrator Alpha Video in Edina, Minn. The second added cameras to the gym and connected the control room to the new facility via fiber in time for the 2012 volleyball season, and Murphy added the system will also be used to produce special event coverage as well.

The control room is about 1,100 feet away from the gym, located next to the school’s 400-square-foot studio. The gym is equipped with three ceiling-mounted Panasonic HD cameras and four wall-mounted cameras, all of which are controlled robotically by students in the control room. The permanently installed cameras and fiber infrastructure saves setup and strike time, Murphy noted.

“It’s very easy for them to know what source they’re on and where they’re going,” Murphy said of the Granite system and its PixButtons, which include built-in displays to show the device icon and file name of a clip or graphic. “It really makes it easy for them to operate.”

Webster City uses built-in Fluent workflow tools, as well as Fluent Macros for its wrestling coverage. During some tournaments, there is action on three mats simultaneously, for which a macro creates a split screen to provide footage from each. Fluent Rapid CG 2, an option that supports Daktronics scoreboards, automatically integrates databases and actions like scorekeeping into templates to streamline the creation of graphics. Webster City uses Fluent Rapid CG 2 with a Daktronics All Sport CG to provide real-time score data during its live coverage.

“The data feed can update the same data element on multiple screens,” said Murphy. “We really like that option.”

“It’s really helped our production workflow become smoother,” he said. “Technically, the quality is better – and the convenience of an all-in-one package is really a great thing.”