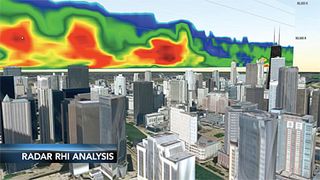 SAN FRANCISCO
It all begins with a dollop of data. One number represents cloud cover, another figure calculates wind speed. In the end, after dozens of complex algorithm calculations and the implementation of detailed satellite and radar imagery, you get this: a vivid, colorful, realistic-looking 3D creation of what tomorrow's horizon will bring.

It's big business, this development and marketing of local weather. And the old adages still remain: do it local, do it different and do it better than the guys across town.

Today's broadcasters are also being pressured to pull together more spectacular weather forecasts with minimal staff and fewer resources. "Broadcasters are repeating their ongoing need to do more with less," said Steve Smedberg, senior vice president for Weather Central in Madison, Wis. "Between the challenge of the economy and the general pressure to differentiate themselves, customers like the idea that there is technology out there that can do everyday graphics and storm tracking graphics"—plus tie in traffic, integrate with newsroom systems and migrate it all to various distribution platforms.

The key is to start with smart data. "The primary focus for us is data, data, data," said Robert Baron, Jr., executive vice president and chief products officer for Baron Services in Huntsville, Ala. It's the key component to building the most complete weather programming for any local station, he said.

KTNV-TV in Las Vegas uses Accuweather’s CinemaLiveHD, which combines advanced 3D graphics engine with virtual sets, custom-built local landscapes, and specially-designed HD weather elements to produce realistic local weather and traffic segments. "That's the primary focus for all our systems—how data gets to the system, and how to best use that data in [our weather platform]," Baron said. The result is the Omni 3D graphics solution that showcases three-dimensional cityscapes, detailed terrain and live camera integration. A key feature is the system's mapping and terrain capability, which allows broadcasters to create a true representation of weather as it's actually occurring. Stations can also zoom viewers on a virtual ride through layered weather data and over lifelike 3D terrain.

Local stations are also warming to the idea of creating 3D models powered by actual weather conditions. When Tropical Storm Alex appeared in the Gulf of Mexico earlier this year, station WVUE-TV in New Orleans was able to create an image of the expanding storm literally while on the air, Baron said. "They were able to tell their viewers exactly when the storm had switched to a hurricane," Baron said. "All that was instantly seen on air."

Since it's weather that often draws viewers to local news broadcasts, there's an urgency to wrangle hyper-local weather information into every broadcast. "Viewers have many sources for national news stories, but weather is a local drama all into its own," said Barry Myers, CEO of AccuWeather in State College, Pa. "We designed the system to capitalize on the special attributes that national news can't possibly have—that local stations can do a much better job of providing accurate, detailed weather to its audience."

Companies like AccuWeather have responded with technology that allows users to see the formation of a storm on a local level—from flooding on a certain street to detailed information on which neighborhoods will be first hit by a storm.

For stations whose viewers are often in the direct path of severe weather, technology like Weather Central's ESP:LIVE has been used to track storm pathways and build individualized threat scenarios. The system can create a scene where viewers are pulled through virtual clouds down to a street-level view to see where the storm will hit.

Another burgeoning trend is the intermingling of traffic and weather reporting. "There's more and more excitement [over the combination of weather] with traffic," Baron said. Combining weather and traffic together allows stations to make both segments more compelling, he said.

After opening its doors as a traffic-specific solution in 2001, Beat the Traffic saw an opportunity last year to offer a traffic solution that combined elements of weather reporting. "We're moving forward in a bigger way [with weather reporting features] after seeing a quite of bit of interest [from customers]," said Andre Gueziec, founder and CEO of Beat the Traffic in Santa Clara, Calif. The goal was to create a fluid traffic presentation that doesn't clutter the screen and uses HD for maximum visual impact.

"Because weather and traffic are local to a metro area, providing hyper-localized information is a key component," Gueziec said.

Industry experts also point to the power of interactivity to entice and retain viewership. AccuWeather, for one, introduced a set of interactive touch controls earlier this year built around a touchscreen device that more quickly integrates elements, such as 3D animations and transitions, from one scene to another. Using touch-controlled switchers and finger-driven zooms, a local weather presenter is able to present a weather story as it unfolds.

"This touchscreen technology allows you to engage the viewer in a new way, as though they themselves were interacting directly with the weather elements," Myers said.

The Omni weather system from Baron also offers interactive event capability, allowing stations to see wind moving or water rising, and last year allowed station WTVT-TV in Tampa, Fla. to show viewers how weather was causing the delay of the Space Shuttle launch. "The system allowed [the station] to cover both breaking news and weather together," Baron said.

Interactivity is also a key feature within the RadarTouch touchscreen from Orad, which includes a software module that allows talent to interact with graphics on both monitors in the studio or with virtual graphics on a hard set, said Shaun Dail, vice president of sales and marketing for Orad.

This 3D cityscape of Chicago’s skyline is combined with Baron Omni’s Range Height Indicator (RHI) to show viewers a coss-section of the storm. Perhaps nothing has encouraged broadcasters to consider the power of mobile and social networking as the weather.

"Different stations and group owners have different perspectives on how social networking can be integrated into their broadcast plans, but I think momentum is growing," said Weather Central's Smedberg. "[Weather forecasting] technology has the capability to draw in those viewers who don't regularly watch local weather as well as capture those users who spend a lot of time on mobile devices."

Up to this point, one of the biggest hurdles for broadcasters has been "how to understand and make their Web, social and mobile media presence viable," AccuWeather's Myers said. Earlier this year, the company announced support for Facebook and Twitter as part of CinemaLive HD, which allows a station's weather team to automatically post graphics, video and headlines to social media sites as well as to a station's Web and mobile sites.

Other tools for distributing news and alerts to mobile and Web sites include Weather Central's 3D:LIVE Fusion, which offers a social networking tool that automatically posts updated information to a station's Facebook and Twitter page.

"One of the biggest challenges in working on multiple platforms is maximizing the time of the talent," Baron said. Omni has the capability to take various sources and by switching within master control, "allow the weather department to be admiral of their own ship."

Added Orad's Dail: "Cross-platform is definitely an emerging trend. As television in general moves more to the Web, there are some things we see emerging more quickly. Breaking news is certainly one of them, and weather, when significant, is another."

A number of stations looking to set their weather presentations apart have taken other approaches. Station KATV-TV in Little Rock, Ark., has begun an all weather channel on one of its digital subchannels. The station has become an affiliate of the AccuWeather Television Network to provide quick access to conditions in key cities around central Arkansas. "[The channel] enables our meteorologists to partner with AccuWeather to deliver our viewers continuous weather coverage for every community in our DMA," said Mark Rose, general manager of KATV.

"[The channel] doesn't compete with local stations, but instead supplements their own weather … by offering a continuous drive back to their own local news channel," Myers said.