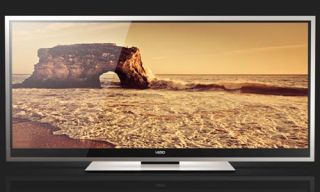 IRVINE, CA—Vizio has announced the availability of its XVT Series Cinemawide LED Smart TV with Theater 3D, the first 21:9 ultra-widescreen TV available in the United States.

The 21:9 Cinemawide screen is wider than the standard 16:9 screen found on most HDTVs, allowing it to fit the 2.35:1 aspect ratio used for most major Hollywood films. The 2560x1080p screen and Edge Lit Razor LED technology deliver HD at a higher resolution than conventional 1920x1080 resolution. The set also features Smart Dimming, for enhanced contrast and detail as well as SRS StudioSound HD for immersive audio.

"As the first to bring a 21:9 aspect ratio, ultra-wide screen 3D HDTV of its kind to the U.S. market, we're proud to be giving consumers the opportunity to view movies the way they were meant to be enjoyed," said Matt McRae, Chief Technology Officer, Vizio. "Not only does the Cinemawide HDTV eliminate the black bars, it also allows movie and tech enthusiasts to get the most out of their HD and 3D experiences with excellent picture quality and Vizio Internet Apps."

The XVT Series Cinemawide HDTV also features Vizio’s Theater 3D technology, for flicker-free 3D that is up to two times brighter than conventional 3DTVs along with four pairs of battery-free 3D glasses. Vizio Internet Apps with built-in Wi-Fi access and a premium Bluetooth universal remote control with full keyboard are also included in the package. The Vizio Cinemawide’s 21:9 aspect ratio allows viewers to watch full-screen, full-resolution 16:9 HDTV on the right side of the screen while accessing Vizio Internet Apps in a column on the left side of the screen.