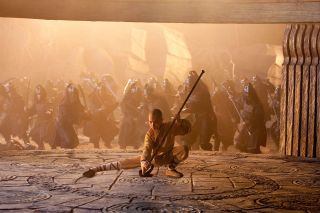 MULTPLE CITIES: Verizon launched its 3D on-demand movie channel today, according to Avail-TVN, the Sherman Oaks, Calif., company supplying the service. Titles becoming available in the next few months include “The Last Airbender,” “Saw: The Final Chapter,” “Alpha and Omega” and “Piranha.”

Avail-TVN says its 3D video-on-demand service “does not require any additional equipment or upgrades to service providers’ existing equipment.” That is, it works on Verizon’s FiOS encoders and set-tops, the latter with a “minor over-the-air software update.” Subscribers still need 3DTV sets and companion glasses to view content in 3D.

Avail-TVN says it uses the frame-compatible format for distribution of 3D content, which is transmitted at the same rate as 2D HD files. Titles are available in MPEG-2 and MPEG-4. Movies will be priced from around $1 to $2.50 more than HD titles. TVN said it’s expecting to expand both its 3D movie line-up and 3D channel offerings next year.

Verizon announced earlier this month it would be launching the 3D VOD channel. The telcoTV provider launched 3D over the summer with the first broadcast of a Major League Baseball game in the format. It will carry the 3D coverage of this weekend’s clash between the Oregon Ducks and the Cal-Berkeley Bears, an inaugural production of cable sports network, Versus.

See...
November 11, 2010: “Versus to Launch 3D Saturday with Ducks-Bears”
Sports cable net Versus will make its 3D debut Saturday on Verizon’s FiOS TV systems with the clash between Oregon Ducks and the Cal Bears. The game is scheduled for 7:30 p.m. ET. The game marks Verizon’s first college football game in 3D.