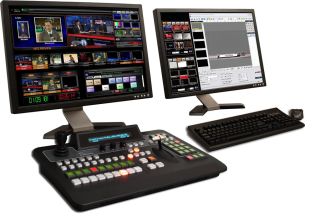 BILLERICA, MASS.—Broadcast Pix announced that the U.S. Army Heritage and Education Center is using a Granite 1000 Video Control Center to produce archives of historical lectures and other presentations on its campus in Carlisle, Penn. Part of the U.S. Army War College, the museum and research complex hosts regularly scheduled series of historical lectures, as well as conferences, meetings, and major events.

Lectures are conducted in a 250-seat multi-purpose room, which is equipped with four Panasonic HD cameras that are controlled through the Granite. Housed in a small control room near the multi-purpose room, the integrated production system allows a one-person crew to produce and record the lectures.

Granite’s built-in Fluent-View multi-viewer feeds source and program images to a 32-inch monitor in the control room, while the built-in Harris Inscriber GS CG is used for graphics during some lectures. When a speaker uses PowerPoint slides, copies are usually acquired before the lecture so they can be used as another source during the recorded program.

The AHEC tells the Army’s story “one soldier at a time” through personal and official correspondence, manuscripts, photos, artifacts, and oral history programs. Much of the center’s collection has been digitized and is available atwww.usahec.org, including recent presentations from the “Perspectives in Military History” lecture series and “Brooks E. Kleber Memorial Readings in Military History” series.