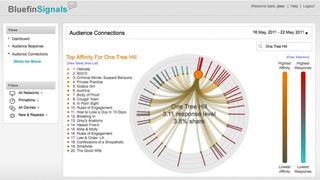 The website AllThingsD estimated the sale price at more than $70 million. Last year, Bluefin raised $12 million in venture capital funding and is reported to have raised a total of $20 million to date.

Bluefin Labs, launched in 2011 and based in Cambridge, MA, offers software tools to monitor viewer engagement, gender and responses through a service known as Signals. The technology gives brands the ability to track commercials that run across U.S. national television, see a clear picture of when and where they air, and gain insight into how a TV campaign moves consumer conversation in social media.

Using an online dashboard, brands can measure the impact of TV ads on brand conversation and discover the volume of social media users exposed to their TV ads. Signals also analyzes brand and lifestyle affinities of TV audiences, so brands can better target their TV campaign toward consumers who are most likely to respond and engage.

Twitter has long acknowledged the close relationship between TV viewing and a viewer’s social media activity. The micro-blogging platform has quickly risen to become the dominant second screen as millions of viewers tune into (and tweet about) major events.

However, Twitter has lacked a clear method of turning its popularity into profits. The Bluefin acquisition, Twitter hopes, will establish the metrics to share with advertisers that prove just how engaged its user base is.

Las December, Twitter announced a partnership with Nielsen to produce a new Nielsen Twitter TV rating that measures reach across social services. It is set to debut before the fall 2013 TV season.