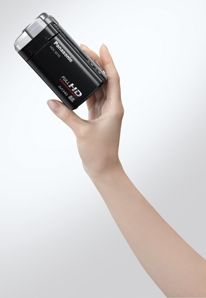 SECAUCUS, N.J: Panasonic this week released two HD video cameras weighing a mere eight ounces. Both cameras capture at 1920x1080 full HD resolution. The $550 HDC-SD10 records on an SDHC/SD memory card, while the $600 HDC-TM10 has 8 GB of built-in memory or on an SDHC/SD card as well. Each model has 16x optical zoom capability supported by Panasonic’s advanced image stabilizer technology to reduce handshake during zooming. The stabilizing feature detects and corrects at around 4,000 times per second.

Both models have an LCD touch control screen, power on when the viewing LCD is opened, and shut down when it’s closed. A pre-record function captures three seconds in advance of use, and the viewing LCD adjusts automatically to lighting conditions.