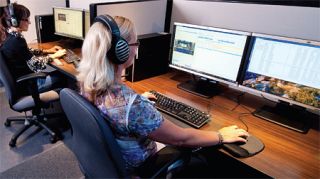 TUSTIN, CALIF.—Trinity Broadcasting Network, a major producer of Christian TV programming globally, has launched one of the most ambitious "TV Everywhere" VOD services to date. Its new online portal "iTBN" gives its congregants and others free access to both its vast archival and new content across DTV, PC, tablet and smartphone devices from a sophisticated Web-based platform.

Production ingest, utilizing Grass Valley K2 Summit servers TBN was founded nearly 40 years ago by Paul Crouch Sr. A family-run company, sons Paul Jr., and Matthew have worked at TBN for decades since teenagers—and Paul Jr. was instrumental in helping guide TBN's new project over the past two years. But in early October, a couple of weeks after the iTBN launch, Paul Jr. resigned abruptly. No reason was given for his departure publicly, but TBN says the VOD rollout has not been adversely affected by his day-to-day absence.

"TBN's mandate is to take the gospel to the whole world," said Bob Fopma, TBN's vice president for production. "Our objective was simple: to make as much of our programming available by VOD. Then we added more complexity to the vision, including years of past material and 'classics'—to include a very sophisticated search element. We thought about the end-user. We wanted that person to have a wide variety of choices and to easily find what they were looking for."

Everything had to be interconnected in a DTV environment, Fopma said, so the project affected a lot of other areas. "What started as a VOD project quickly grew to include transforming our entire facility to a file-based tapeless environment. As a result, a more permanent long-term archive solution was also needed. This then affected our existing Master Control, and a MC expansion was added. We had put together a 'scope of work' document to define our objective and got familiar with vendors [and] one of the companies we contacted was Key Code Media, [which] we had already done business with for several years."

iTBN loggers room The project's final result is what Mike Cavanagh, president Key Code, a Burbank, Calif.-based systems integrator, calls "one of the most advanced [Web] sites I've ever seen, as TBN seeks to 'refresh' for the next generation. You're able to actually search within their system, within shows, by topic. That's very sophisticated. You can go on a mobile device—an iPad, perhaps—and do very delineated iTBN searches for specific subjects across a lot of content, and then can pull it from inside any given show," Cavanagh said.

"One big challenge we faced—and this was also the biggest 'wow'—was online-capture in the Dalet system and tagging fresh content with approved metadata so that some of the new TV shows could be up online literally that same night," Cavanagh said. "So it wasn't only dealing with 35-year-old content, but also with near real-time conversions for very fast Web retrieval and viewing on iTBN."

Ed Locke, senior solution architect at Key Code Media, said iTBN requires constant multitasking. "While they're recording the [ATSC] TV version on the studio set, we're actually streaming it into the asset management system. So only a few minutes after the live show is over, the logging team picks it up and adds the necessary rich metadata almost simultaneously as the media is going out the door to the render farm to be FTPed up to the site for the Web version."

(click thumbnail)
TBN - Core File-Based Workflow Diagram For its asset management platform, TBN chose French software developer Dalet's Enterprise Edition, which up until then had mostly been deployed for news and sports scenarios. Dalet's U.S. general manager, Julien Decaix, said the platform provides both the organizational and operational backbone for the workflow. "In file-based workflows, it's very easy to lose track of assets and all the different uses of media. Our [iTBN] solution unifies the systems and brings a sense of order. It also helps manage workflow more productively with work-order processes—and automates a lot of background tasks—such as transcoding and pushing content out for distribution."

One specific development was creation of a more streamlined workflow to cut video for the iTBN Web site. "When programs come to Trinity from third parties, they usually have 'handles' for program beginnings and endings," said Korotkin. "Previously, a second high-res version without handles would need to have been created, then transcoded, and then sent to the Web… all being very resource-intensive. Instead, we've created a way to trim the video and send it [directly] to the Web without necessitating that additional high-res version."

In the iTBN workflow, files are ingested into Grass Valley K2 servers and simultaneously appear in Dalet folders—from which producers assign loggers to place locators for program start- and end-points. Files are then automatically sent to a Rhozet (Harmonic) transcoder, which "mirrors" them back to Dalet and simultaneously sends them to the Web site. During transcoding, loggers preview the video and add additional metadata. Once management-approved, the XML metadata is automatically married to the already-published media, parsed by the online designer application, and subsequently published online.