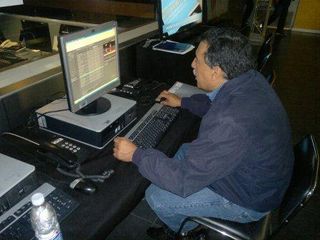 Televisa was one of the broadcasters who used the IPBrowseWeb host broadcaster service.

LONDON One axiom of big-event broadcasting is to use established technology. The reason is obvious: There are millions or billions in advertising on the line.

But change must happen, otherwise we’d still be churning out a few hundred hours of programming using a VTR recording infrastructure at an event like the London Games, rather than the 5,000 hours or more of content possible in a modern server-based environment.

At something like the London Games “pushing the envelope” does happen. These advances are incremental, not experiments but something more akin to “proofs-of-concept” to move the industry forward.

London saw the debut of several new technologies, and perhaps the most important was the deployment of true Web browsing of content. This could be a game-changer, something that will make the split production of large events much easier and thus more common in the next few years. This will allow broadcast personnel to stay in their home country yet still access the live feed and all logging information as it’s being reviewed on-site. The potential travel and housing cost savings are huge.
NBC had a 3DTV demo running in its IBC facility.
The technology that makes it possible is EVS’ IP Web software, an extension of the company’s IPDirector software that has made browsing and content exchange a simpler affair for broadcasters working on big sporting events. Producers can now see content within 1 second of a live recorded feed through the Web, create their clips and rough cut edit before importing just what they need locally.

Cost-effective, simpler split production -- the subject of many complex and bandwidth-intensive Games facility designs for more than a decade -- may be on the immediate horizon.

London was the first Games that had a 3D component, with more than 230 hours produced from the content captured by 33 cameras and six ENG crews. A turnkey 3D channel with English commentary was available for 16 hours each day.

All of this was piped through three dedicated trucks connected to their own production centre within the IBC. The bandwidth and capacity of the latest EVS XT3 servers was put to good use here.

Super Hi-Vision was also featured in London, with an NHK truck and three cameras on site. Six public 50-foot screens in the UK and Japan joined two VIP test screens at the IBC and in Washington. The world feed was sent to Japan on a series of private academic networks, while it’s was piped around the Olympic network via dark fibre and to the UK screens as two MPEG transport streams.

Tracking and searching for content in a high-volume operation is critical. In London, host broadcaster OBS supplied the “Broadcast Data Feed” to RHBs. This feed had within it all the logs from the massive OBS pool of EVS servers, and more. This could serve as a supplement to a broadcaster’s own logging and add value to all host assets, making them easier to find and providing more information.