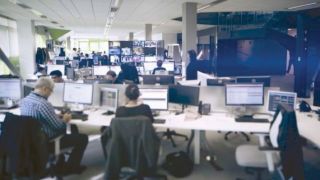 NEW YORK—Due in part to the proliferation of social media, the way people get their news continues to evolve, and broadcasters are embracing these changes in how the news is even disseminated. The linear broadcast that has been a staple of TV reporting—including the daily evening news—has given way to multiple delivery platforms. At the same time belt tightening means newsrooms increasingly have to do more with less, but here too technology is having a serious impact as audiences fragment in the evolving 24-hour news cycle.

This has led to broadcasters adopting the “digital first” policy that was first championed by publishers, according to Warren Davis, senior product manager at Bitcentral in Newport Beach, Calif.

"Digital curators are getting access to content as it is being created for live broadcast," he said. "This is being facilitated by new search, production and publishing tools in the newsroom being shared across the digital production teams. Additionally the push for earlier metadata enhancement of raw camera and finished content allows for the automated curation and assistance in creating new or re-versioned content for live and digital distribution."

This year could see significant changes, beginning with how news is produced, but more importantly how it is delivered or distributed and also in how it is consumed.

"There are many, many new things that are coming up," predicted Raoul Cospen, marketing director for news at Dalet, which has also adopted a “digital first” approach. "The first one is obviously the digital disruption and the fact that even televisions now have websites and digital ways of putting their news or posting their news. So, digital is becoming more pre-eminent in workflows."

This digital first approach addresses changes at the production level, and Dalet is among the companies leading the move to the next-generation, borderless multiplatform newsroom with Dalet Galaxy Five, which will leverage advanced cloud and AI technologies, Cospen said.

GOING WITH THE WORKFLOW

The work of producing news for viewer consumption has long been about the workflows, but in 2020 these will continue to evolve as part of that move to digital first. However, in many ways it could still be "business as usual," as the end result is about delivering the news in a timely manner.

"Editorially, there are new needs for the TV script but also the CMS script, but also the narrations that are going to go inside the video and so on," said Cospen. "Then on top, you will have broadcast video that sits on one side but also the digital version with multiple formats; obviously, 9:16, 4:3, [Instagram] square and so on. But that will embed some additional graphics, some captions, maybe some translations, maybe some narrations, some stuff that is going to make the video more compelling to the digital viewers, basically."

None of this is exclusive to news production, but it is the never-ending daily news cycle that presents the added challenges to the workflows. In addition, there is the fact that viewers aren't sitting around the TV to catch the evening news at a set time. As such, the traditional workflow is very much a work in progress.

"There is the move toward mobile journalism, user-generated content and we need to arm those journalists with the toolsets so that they can do everything they need to do over a phone or tablet," said Ray Thompson, director of broadcast & media solutions at Avid. "We're seeing a move away as well from the truck or even cameramen, and the new technologies enable broadcasters to become more nimble and operate with less."

Even within broadcast facilities the actual newsroom is undergoing significant changes, notably with the move to IP.

"This is extending the ability for anyone in the newsroom to work with reporters who are everywhere, and this can include editing of video and the adding of graphics," added Thompson. "We're also seeing a move to a cloud-based repository, which allows broadcasters to route video as a story breaks whether it is regionally, nationally or internationally, and to be shared to that audience."

The evolving workflows will address this cross-media proliferation of news content delivery as well. "We can increase the number of output channels, and a lot of our existing customers are looking to be more efficient from these tools," said Trevor Spielmann, head of sales for newsroom solutions at SCISYS, which was acquired by CGI last year.

However, there are also new challenges as a result.

"We are finding that it must be cost effective, easy to learn, easy to deploy and flexible when deployed," added Spielmann. "Our ‘Open Media’ [platform] can do all this and be customized, and integrated with third party applications, which provide that flexibility to our clients."

While the newsroom may have to do more with less in terms of people, it will be getting help from artificial intelligence and machine learning tools, which can provide the ability to utilize content in the archives far faster than ever before. This could also result in a change in the general repurposing of archived content.

"I would not call it ‘repurpose’ anymore because we used to repurpose before, but because of the ‘digital first’ aspect, it's not about repurposing," said Cospen. "It's about producing some content for many outputs, taking many outputs in consideration."

This is just one aspect of how AI could be utilized this year and beyond. AI has fully strategic uses, which include the calibration element as well as the ability to better collaborate across a story even as it has more contributors.

This will allow for a more collaborative working environment added Cospen, who noted this includes, "the ability to comment, the ability to do to-do lists, the ability to follow pieces of news and so on. The last point is adding a resource management on top of your newsroom, to optimize, to be more efficient and again to tell better news faster, cheaper and in a more efficient way."

Searching for just the right content, when it is needed most, could also be made easier via AI, and Dalet is offering its new automated “Discovery Search,” which works with the planning editor and story editor. "It is identifying potential matches for what you’re currently doing, for things that you didn't identify as potential material for your story," said Cospen. "It's going to help you to dig further in your archive and to bring some extra content that is going to make your story a bit more compelling."

AI can provide the way to pull the content from the archives via metatags and other metadata in a way that simply wasn't possible in the past, but it can also do searches far faster than a team of researchers.

"It can do facial, speech-to-text and use other algorithms to recognize a particular scene or even logo," said Thompson. "This is where the rubber meets the road in really being able to take advantage of the archives, but it can also determine the right content for a specific audience."

However, the full potential of AI will not come soon.

"AI is still a buzzword at the moment," cautioned Spielmann. "It is what everyone is talking about, even if a lot of it isn't really AI. There are plenty of third-party AI solutions as everyone has a different view and a different application in mind. So our view is to be as flexible as possible in how these can be integrated."

Today, thanks to our increasingly powerful smartphones, it isn't just the professional TV reporters that are doing the work of newsgathering. More and more content is being shot on those devices, and with the right toolsets this content can be used by teams in the physical newsrooms.

"TV news production has always had access to user generated content [UGC]," said Davis. "Stations are marketing it to be used with their apps and website UGC contribution portals directly from the user's mobile phone. Of course all of these consumer-level video contributions require transcoding since a variable frame rate is used for most all mobile phone recorders and must be converted into a fixed frame rate before going to air."

The quality of the actual content is just one part of a very complex equation, and here is another aspect that AI can streamline.

"The big challenge is about getting the rights to use that content, but we now have the toolsets that can allow you to scrap the social media feeds via hashtags and other metadata," said Avid’s Thompson. "User generated content is produced so quickly that users can beat the actual broadcasters to the story, so it is imperative that those news providers find that content and can get it posted."