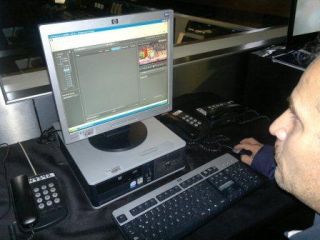 LONDON -- Televisa’s facility at the London International Broadcast Center (IBC) was interesting for a variety of reasons.

Most obviously, most of the facility was located outside the IBC, in several buildings and an OB van in the satellite compound. These buildings are connected by triax and fiber to studios located inside the huge IBC complex.

Francisco Larios Sanchez, technical director of sporting events for Televisa, explained that this situation was simply a space issue -- the Mexican rightsholder acquired the rights quite late, and space inside the IBC building was limited. Two other related Mexican stations with rights -- Azteca and Televisa Deportes Network -- do have complete facilities inside the IBC.

But Televisa’s split is more than just the few hundred metres between studio and technical rooms, it’s also between London and Mexico. Like many broadcasters, Televisa sees value and savings in keeping a substantial crew complement at home.

“Normally for these events we have 200-220 people,” said Larios. “Now because so much is in Mexico, we have just 110 people here, a big cost savings in hotels, flights, etc.”

As for the coverage, Larios said they were creating their own variant of the Multichannel Distribution Service (MDS), the11 ready-to-air channels of competition plus Games news delivered via satellite by host broadcaster OBS.

“We are doing our own MDS,” said Larios. “We receive the VandA package from OBS (48 signals) ... then do our own 10 signals focused on Mexican athletes and sports favored by Mexico.”

Most of the 10 signals -- delivered to Mexico using fiber -- were live. Televisa was on-air with Games programming from 6 a.m. to 9 p.m. daily. Beyond the live signals, program production took place both in Mexico and in London.

SERVERS AT THE CORE
The browse, duplication and content access benefits of a server infrastructure and its associated software were central to Televisa’s production.
Televisa had two EVS IPEdit stations, one in London and one in Mexico. Likewise, both sides of the split facility had a single IPDirector station.
Both Televisa’s London facility and its Mexican production rooms were connected to the host broadcaster servers via the host broadcaster Browse Service. This service placed an EVS server within a rightholding broadcaster facility. Production personnel in Mexico or London could use EVS IPBrowse software to look at lo-res browse copies of content before picking only needed content for HD-res delivery to the EVS server in the facility.

Televisa had two EVS IPEdit stations, one in London and one in Mexico. Likewise, both sides of the facility had a single IPDirector station.

Also, Televisa installed an active storage server integrated with Sienna storage to get a backup and to keep the content for historic purposes. This content was recorded in SD and was also connected with the Mexico facility, which could get material immediately.

TOUCHING THE FUTURE
Televisa was also experimenting with a new-in-London host broadcaster service called IPBrowseWeb. This service allowed producers and production personnel located offsite to browse content, create clips and even retrieve content with minimal delay over standard Internet connections.
Televisa received the 48 signal VandA package from the host broadcaster and turned around its own ten signal package focusing on Mexican athletes and sports favored by Mexico.
Larios said Mexico-based personnel could see (in lo-res) competition material within 1 second of its arrival on the host servers. As for delivery of hi-res content, they restricted this to clips of 5 minutes or less.

“In this guy kind of an operation with many editors and producers in Mexico, it’s a way for the off-site staff to be more involved, they can know immediately what’s happening and can get some content quickly.”

A Mexican in long jump is an example of how IPBrowseWeb was used. In this case, the international feed had just one of his jumps, so Televisa could use IP Web to pull his additional jumps, a small amount of content, across the web.

“This will get more use in the future for sure,” said Larios, a 36-year veteran of the industry. “Every event costs more with less space.”