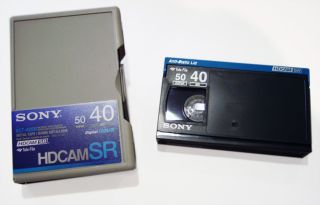 MULTIPLE CITIES: The supply of Sony’s professional videotape started getting tight within days of the earthquake that rocked northern Japan. Users are reporting a shortage of HDCAM SR tape particularly, because there are no ready substitutes. However, the supply of all types of magnetic professional videotape is tight, according to Mark Schubin, engineer in charge at New York’s Metropolitan Opera.

“We’re running into the problem here at the Met,” he said.

Both direct and indirect supply lines from Sony have been disrupted. Sony makes HDCAM SR and several other professional video products are manufactured at the company’s facility in Sendai, roughly 80 miles from the epicenter of last Friday’s 8.9 magnitude earthquake. Sony announced on Monday that the facility had ceased operations. The Taipei Times said yesterday the facility was still flooded, “and Sony officials do not foresee the factory becoming operational in the short term.”

Mike Cullen and Bob Daly of Media Distributors, a supplier serving the U.S. market, wrote a note to customers warning of ongoing shortages:

“The earthquake resulted in severe damage at one of Sony’s key production facilities very near the epicenter in Sendai, Japan. Almost all Sony Professional Media products are solely produced there. In addition, several other Sony facilities in Japan remain closed due to power outages in the region. There has not been any word on when these facilities are to go back on line, or details on the condition of the damaged facility in Sendai.”

“The earthquake and resulting tsunami in Japan have dealt a heavy blow to the major suppliers of recording media, particularly Sony,” it continues. “Please bear with us as we work to provide you with products that are in very limited supply, and please keep the people of Japan in your thoughts and prayers.”

TapeandMedia.com is running a ticker that says, “Due to the earthquake and tsunami in Japan, Sony has placed many Sony products on severe allocation. Please call us for orders regarding Sony Professional Video Products, Blu-ray Disc, DVDs and CDs.”

Maxell and Fuji make tape interchangeable with some of the affected Sony formats, and both are reported to be experiencing a spike in demand. A Fujifilm customer said the company today responded that it could fill an order for HDCAM tape, but that it was “very short of inventory right now. Please allow lots of time for future deliveries.”

One user said Hollywood studios are falling back on LTO, a linear open-standard format tape that handles full HD 4:2:2 resolution, similar to HDCAM SR. It, too, may become hard to come by. Daly and Cullen said Media Distributors would not “fulfill large ‘load-up’ orders, or support any hoarding of products by any customer,” nor would they “entertain requests from new customers for any large quantities of these products.”