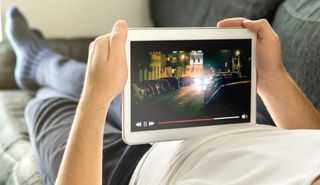 LONDON—The global streaming industry will have reached $100 billion by 2025, according to the latest report from Digital TV Research. That would represent a doubling of its value from the $50 billion that SVOD revenues generated in 2019.

In terms of global subscribers, Digital TV research estimates a growth of 529 million between 2019 and 2025, bringing the global total to 1.17 billion. China and the U.S. are expected to make up 51% of this global total. However, that number is actually down from 2019, when China and the U.S. made up 63% of all subscribers. Like with revenue, Digital TV Research points to this as an example of the growing presence of SVOD in other countries.

While more countries are taking up the streaming market, by 2025 three streaming platforms are likely to control half of the world’s subscriptions, per Digital TV Research—Netflix, Disney+ and Amazon Prime Video. Netflix is projected to lead the way in subscribers with 263 million, up 91 million from 2019, but Disney+ is forecasted to have the biggest growth, with an estimated 142 million subscribers signing up for the streaming platform, bringing its total to 172 million subscribers. Those numbers for Disney+ are actually a lowering of expectations, according to Digital TV Research.

“We believe that Disney+ will have a huge impact. However, we have lowered our 2025 forecasts by 30 million since our May edition,” said Simon Murray, principal analyst at Digital TV Research. “Analysis of Disney’s June results showed a rapid deceleration in subscriber additions after an initial spike in its early launch countries. We expect this to be repeated elsewhere.”

In addition, a third of the world’s TV households are expected to have at least one SVOD subscription by 2025, up from a quarter of homes at the end of 2019, per Digital TV Research.

The full report is available through Digital TV Research’s website.