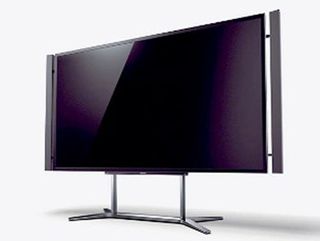 NEW YORK—Sony has announced the debut of its first 4K TV, an LCD panel that delivers images at four times (3840x2160) the resolution of full HD. The 84-inch XBR-84X900 will be available in select N. American retail locations for an undisclosed price later this year. The company made the announcement in advance of the IFA Show in Germany.

With the majority of U.S. homes now with HDTV sets—and little consumer interest in 3DTV, consumer electronics manufacturers have recently been touting 4K as the “next big thing” in visual imaging. At CES in January, several companies, including Samsung, Vizio, Philips, LG Electronics, and Toshiba, were showing prototypes of 4K TVs, some on OLED technology, which is also expected to play a role in the future of home displays.

But with little 4K content (or a way to distribute it to consumers), it could be awhile before consumers are able to take advantage of true 4K, which is now mainly relegated to digital cinema installations. Sony says more than 12,500 4K digital cinema projectors are in use worldwide and that its flagship F65 CineAlta 4K camera will spur more 4K content creation. Sony’s first 4K consumer item, the VPL-VW1000ES 4K home theater projector, was announced last year and is available through custom installers.

The XBR-84X900 also incorporates a 10 Unit Live Speaker system for 5.1 with detachable side speakers as well as full network connectivity, allowing consumers control of their viewing experience via a tablet or smartphone with the downloadable Media Remote App. With built-in WiFi they can access movies, TV shows, and online video and music through the Sony Entertainment Network suite of services including Music Unlimited, Video Unlimited, Netflix, Pandora, Yahoo! Broadcast Interactivity and more than 50 other popular internet entertainment providers.