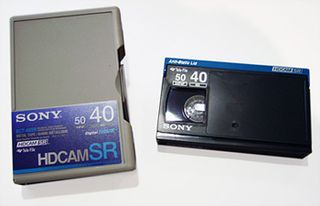 PARK RIDGE, N.J.: The word out of Park Ridge today is that Sony has resumed production and delivery of HDCAM SR professional videotape. Sony said its Sendai tape facilities will soon be returning to full capacity, “with gradual increases in production.”

The Sendai factory was badly damaged in the March earthquake and tsunami that devastated parts of Northern Japan. The tape is commonly used in the United States in post production. Supplies tightened immediately following the natural disasters in part because there is no ready substitute for HDCAM SR.

Sony said tape coating production of both HDCAM SR and HDCAM media restarted on schedule in July at the company’s Sendai/Tagajo plant, with shipments of new product resuming at the end of August for HDCAM SR and early September for HDCAM. Sony said production volume would increase each month as it works to stabilize the process “and continue its efforts to ensure the highest quality control standards.”

“Our teams in Japan have done a tremendous job in recovering production over the past six months,” said Darin Scott, senior vice president of Sony’s Media and Applications Solution Division. “We are taking a cautious approach to assure the quality of the product we ship to the market, but I’m proud to say Sony Professional Media is back.”

In addition to the recovery of HDCAM SR and HDCAM media, end-to-end production of the DVCAM/Digital Master and Professional Disc formats resumed in May and the production and supply of those products have been consistent and stable to date.

As for other coating media products, Sony Digital Betacam restarted end-to-end production at the end of September, with MPEG IMX and Betacam SP following in late October.

See . . .
April 29, 2011“Sony Says HDCAM SR Production To Resume in July”
Sony this week said it had a plan in place to restart its Tagajyo plant. The Tagajyo facility is the only place where Sony’s HDCAM SR tape is produced.

March 22, 2011: “Sony Suspends Operations in Five Plants Due to Shortages”
Sony today said it had to halt operations temporarily at five sites not directly affected by the March 11 earthquake and tsunami, due to raw material shortages.

March 17, 2011:“Supplies of Sony Videotape Running Low”
Users are reporting a shortage of HDCAM SR tape particularly, because there are no ready substitutes.