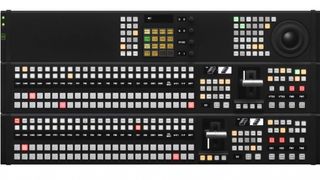 Mark Bonifacio, director of live production systems at Sony Electronics, said the market for large switchers has grown smaller and the company has had success recently in bringing products to market that deliver high performance but in a smaller form factor and at a lower price.

Target users for the new switchers include production studios, stadiums, houses of worship and outside broadcast vehicles requiring multiple inputs in a limited space. The new switchers are also ideal, Bonifacio said, for small production facilities that have limited control room space.

The new Sony switcher family incorporates a common interface and control architecture, he said, allowing new operators to avoid a steep learning curve every time they work on a new model. “We’re seeing virtually all of the major switcher suppliers now offering mid-sized switchers,” Bonifacio said. “From Sony’s point of view, customer needs have changed for live event production. They need to do more with less in terms of both size and price, but without any compromise in quality.”

Another reason for this shift is also because the evolving technology of production switchers now allows the user to do more in one M/E, Bonifacio said. “For example, back in the early 90s, one M/E only had two keyers. So if you needed to have four sources keyed at one time, it required two M/Es to do it. Now four or eight keyers are more common in one M/E.”

Also, if you wanted to have four boxes on the air simultaneously, it required four channels of digital effects (DME). Now resizers are part of the keyers, so a four-box effect can be done in one M/E without the need for any external DME,” he said. “In other words, previously a four M/E switcher with four channels of DME was standard to do a typical newscast. Now that can be done easily with a 2 or 3 M/E switcher.”