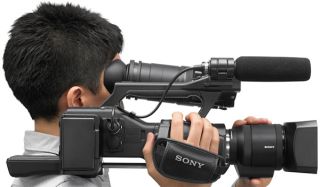 It records 1920x1080 AVCHD 2.0 video at 50p/25p/50i or 60p/30p/24p/60i, according to Sony, and captures 16.1 megapixel still shots with RAW format support. It also features a built-in mechanical shutter to eliminate related blur during long exposures.

The incorporated Power Zoom E-mount lens is electronically controlled by both the zoom rocker lever on the camcorder grip and top handle. The company says the camcorder design allows attachment of “both established A-mount lenses via the LA-EA2 lens mount adapter,” as well as other types of lenses using third-party adapters.

Sony’s HXR-FMU128 flash memory unit can dock directly to the camcorder for recording an immediate backup. The camcorder is compatible with the new Mirroring Memory Stick, the MS-PX64/32/16, which supports dual, or mirrored, recording. The new card will be available in 16, 32 and 64 GB.

The NEX-EA50EH is planned to be available from Sony Professional Solutions Specialists in October, with dealers taking pre-orders now. DSLR News Shooterreports that the NEX-EA50EH will be priced at less than £3,000 (US$4,713).
~ Deborah D. McAdams