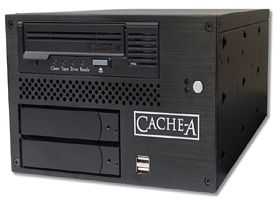 SEATTLE—The pace of introductions of new digital storage media is ever quickening and the breadth of such offerings widening. Historically, archive systems have been proprietary. These circumstances have lead to the lack of interchange of stored archives and lack of interoperability of archive systems. The Society of Motion Picture and Television Engineers (SMPTE) has set out to change that situation.

AXF can help the migration of earlier storage formats to LTO-5/LTFS. Development is well along on what is called the "Archive eXchange Format" (AXF), which is intended to serve as a lingua franca, referring to common languages that throughout history have allowed speakers of different native languages to communicate with one another. AXF is a file wrapper, and, when necessary, a file system, to provide structure to archive media and archive objects that allow them to be exchanged between different archive systems and that even allow archives to be recovered without the use of an archive system, when necessary.

In the parlance of system design, AXF serves as a layer between the file systems that exist on some media (effectively providing a file system for those media that don't already have one) and the applications that are higher in the system stack and that call for the creation, reading, copying, and such of archive objects. Even the concept of an "archive object" itself is defined in the AXF standard, AXF uses the eXtensible Markup Language (XML) in its various data structures to make the information that it carries self-defining and human-readable.

Media archiving has been growing by leaps and bounds, according to Merrill Weiss, chair of SMPTE's Working Group on AXF and president of Merrill Weiss Group LLC. He cited a pair of reasons for this: an ongoing increase in media production, and, thus, the need to archive it; and a lessening in the cost of storage, making archiving of media a more cost-effective proposition. But, he pointed out, the proliferation of archiving systems and of archived content leads to an increased need for methods to exchange content between archives, to consolidate archives, to migrate stored content from one technology to another over time, and to move content from locally-stored archives into the cloud and back. AXF, he said, is designed to help with all of those transitions.

One question that arises frequently, Weiss noted, is whether the emergence of the LTFS file system for LTO-5 and subsequent generations of digital tape obviates the need for AXF. His answer was that it does not.

"In fact, AXF can help the migration of earlier storage formats to LTO-5/LTFS and can provide for stability of the content format when LTFS eventually is superseded by some newer file system," Weiss said. "Moreover, AXF provides a mechanism for transferring content between file systems such as LTFS and those structures that will exist in cloud-based storage environments."

One of the hopes for the SMPTE work, according to Weiss, is that eventually AXF will become the native format in systems. With that in mind, the standard has been crafted as media-agnostic and file type-agnostic. "AXF is a wrapper that can handle not just media files but any type of file, including text files, XML files, Excel spreadsheets, Word documents, executables, you name it," he said.

Merrill Weiss As file archives have become larger and larger, another challenge thrown to the AXF working group has been how to handle and index files that span over several different pieces of media, either because the file is larger than the capacity of a single medium or because there is not sufficient space remaining on the medium to store the archived file. AXF provides a system for locating the spanned segments of an archive object.

The job of writing the AXF standard has taken a lot of "crystal ball gazing." Weiss said that much of the archived material itself is expected to last far longer than any single generation of media. "So as you go forward over years of storage, decades of storage and beyond, you have to have a way of having it get from one media generation, or one media type, to another."

The AXF work will lead to several standards in a suite of documents. The first of those documents, which will provide the foundation for the whole AXF system, is expected to be completed this year and begin the SMPTE approval process. Additional documents that cover the application of AXF to specific media types and that define how to move archive objects between media types will follow soon thereafter.

"All interested parties are welcome to participate in the work," said Weiss.