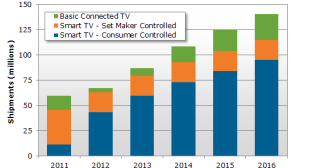 SANTA CLARA, CALIF.—Smart TVs are moving to the mainstream, with worldwide shipments expected to grow 15 percent in 2012. With the shift, regional preferences and TV consumption habits are changing, according to the latest NPD DisplaySearch “Quarterly Smart TV Shipment and Forecast Report.”

Smart TV shipments are tightly linked to content consumption habits. For consumers in China, there is plenty of free content on the Internet and few structured services, giving market advantages to TVs with built-in browsers. Furthermore, Chinese consumers are prepared to invest more money in TVs.

The accessibility of content and broadcast services market penetration have been helped in Europe and Japan by connected TV. In China, the availability of free content on the Internet has had a similar effect. Connected TV’s shipment shares were 26 percent in China and 34 percent in Western Europe in 2011. In 2012, it has grown to more than 40 percent in those regions, while Japan has the highest penetration: 55 percent.

Smart and connected TV shipments account for a large percentage in most regions, but North America penetration is around 20 percent, the lowest of any region.

“North American households consume the highest levels of internet video, averaging over 30 GB per household every month according to Cisco, yet they don’t seem attracted to connected TVs,” said Paul Gray, director of European TV Research. “We find that North America leads by far in paid on-demand services, which tend to be tied to set-top boxes.”

On the other hand, Western Europe consumes more free content every month than North America does, and catch-up services are beginning to dominate. Connected TVs are flourishing with open standards like HbbTV gaining acceptance. The development of the Ginga standard in Brazil is following a similar path in Europe, with commercial broadcasters uniting around a common platform.

“Smart TVs that have browsers and can access the open Internet are rapidly gaining share,” Gray said, commenting on the importance of functionality.

Approximately 9.5 million consumer-controlled smart TVs shipped in the second quarter of 2012, with 43 million expected to ship this year. This figure is forecast to grow to 95 million in 2016.

At the same time, basic sets that link to the HbbTV and Ginga services will enter at the lowest price points in Europe and Latin America. The challenge for brands will be to bring enough value to their sets with extra functions. New open standards such as HTML-5 will help enable connected TV sets to compete with cheap streaming boxes.