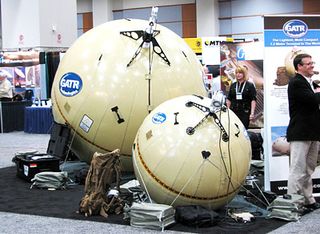 Stereoscopic television was just one of the scores of topics given attention at this week’s annual satellite industry trade show being held in Washington, D.C., however the Tuesday industry forum—“3D TV: After the Hype Comes the Reality”—provided some insight into where this relatively new content format is headed and how long it will take to get there.

These unusual inflatable satellite antenna systems from GATR Technologies were among the thousands of products on display at Satellite 2012. “We haven’t seen very much growth in 3D,” said Andrew Wallace, Eutelsat’s chief commercial officer and panelist in the Satellite 2012 3D forum discussion. “3D …has had an exciting start [but] it’s slowed down a bit—it’s much, much slower than high definition.”

Wallace noted that at present Sky TV in the U.K. has some 10 million subscribers, with only 70,000 opting for 3D services.

“It’s not getting as much programming, as much content [produced],” said Wallace. “We’re only seeing about 20 to 30 movies released per year in 3D, which is just no enough.”

Admitting that 3D numbers were “tiny” right now, Wallace did expect 3DTV to take off eventually.

Panel members observed that while 3DTV is moving slowly right now, they did see a bright future for it, especially after “glasses-free” technology was fully developed. Another factor cited in making stereoscopic television more viable was more efficient and better video compression, as transmission of 3D now requires 20 to 50 percent more bandwidth than HD. Other uses for 3D were also forecast, including digital signage and telemedicine.

The Satellite 2012 Conference and Exhibition has attracted more than 11,000 attendees from 70 countries, along with some 350 exhibitors who filled up approximately 70,000 square feet of floor space at the Walter E. Washington Convention Center in downtown Washington. The March 12-15 show is celebrating its 31st anniversary and is once again this year co-located with the Mobile Satellite Users MSUA-9 conference.

In addition to forums, keynotes, educational seminars covering the full gamut of sat industry topics from launch operations to satellite life extension, Satellite 2012 is also hosting industry receptions, awards presentations and other events. A complete schedule and presenter list is available at www.satellitetoday.com.