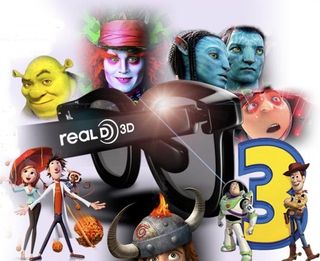 NEW YORK: RealD, the stereoscopic 3D projection specialist, is expected to go public later today in a bid to raise $151 million at $14 a share. The Beverly Hills, Calif., company’s 3D technology dominates in theaters--it’s in more than 1,100 out of the nation’s 4,500 screens. RealD’s Buddy Holly polarized glasses are a staple at 3D-capable cinemas, but those specs represent an uncertainty for BTIG analyst, Rich Greenfield.

“We increasingly believe domestic eyewear subsidies to RealD will be reduced or cut entirely over the next couple of years,” he wrote. “Unless RealD is going to give substantial shares/options to the Hollywood studios, RealD will not be able to sustain a 50 cents-per-attendee subsidy from the Hollywood studios. We believe the studios have movie-to-movie contracts with RealD and that all of them believe they are paying unnecessarily for the glasses.”

The cost for the polarized specs is expected to shift to movie theaters and to RealD, he said.

“Beyond the glasses, the studios are already funding the exhibitors’ digital projectors and servers through virtual print fees, while RealD is funding a small portion of the glasses and a 3D projection system add-on, and the exhibitors are paying for essentially nothing beyond buying a ‘silver screen’ to make 3D look brighter and sharing 40 to 50 cents of the $2 they are receiving for the 3D upcharge.

“With exhibitors generating substantial cash from 3D at virtually no cost, and RealD’s business model set to result in a public market valuation of $800 million-plus, we suspect the studios--who risk billions collectively every year to produce movies--will use these facts... to drastically reduce the level of eyewear subsidy.”

RealD’s prospectus indicates first-quarter 2010 revenues of between $60 million and $65 million, exceeding BTIG’s estimate of $49 million. BTIG nonetheless reduced its fiscal 2014-15 estimates for RealDbecause of its view on the glasses subsidy and 3D cinema demand in general.

“We performed a top-down analysis of U.S. box office and we simply believe our prior estimates assumed 3D became too large a percentage of overall U.S. movie attendance,” Greenfield said.

“We have a hard time believing that more than one out of every three attendees of a movie in a few years will be for a 3D film,” Greenfield said. “To that end, we simply do not believe re-releasing old movies in upconverted 3D format will materially impact overall 3D box office.”

He said there may be one-offs like “Titanic” in 3D due in 2012, but no “meaningful re-release every month or two.... We simply do not believe there will be enough ‘good’ 3D movies over the next several years to sustain the 3D attendance per screen levels we are currently witnessing, as those levels are likely driven by a scarcity of screens and the 3D novelty effect.”
-- Deborah D. McAdams