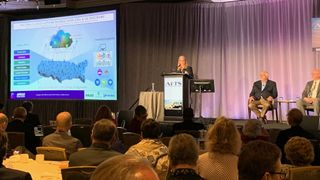 WASHINGTON—ATSC has set the benchmark of launching its NextGen TV standard (aka ATSC 3.0) in 40 U.S. markets by the end of 2020, and as a number of sessions discussed during the APTS Public Media Summit on Feb. 25, public television stations can and will be a key part in that effort.

The theme of the 2020 APTS Public Media Summit, which took place in Washington, D.C., is “The Power of Collaboration.” As John Taylor, LG’s senior vice president, told attendees, “moving from the lab to the marketplace requires a huge amount of collaboration among so many stakeholders; really different teams, different leagues, even different sports. No where is the power of collaboration more evident than bringing NextGen products and services to the American public. Together, we’ll make it happen.”

LG, as well as other TV manufacturers, revealed some of their efforts for supporting NextGen TV at the 2020 CES show, but other speakers at the Public Media Summit’s Tuesday sessions spoke more directly how public media can provide assistance and reap the benefits.

“The importance of local television stations to their communities stems from the ability of individual stations to know best what programming and services their communities want and need, and the same will hold true for NextGen TV offerings,” said O’Rielly. He also claims that these new features are likely to help public stations compete with OTT providers.

“Few entities are as nimble and able to experiment with new technologies as public broadcasters, so it will be very interesting to see the future develop,” O’Rielly added.

O’Rielly also was sure to encourage attendees and their stations to file any comments regarding NextGen TV in the FCC’s ATSC 3.0 proceeding, which is expected in the near future. O’Rielly’s work with KidVid rules was also discussed during his speech. Commissioner O’Rielly’s full speech is available online.

Fittingly, APTS had a representative of one of the public stations that is currently experimenting with NextGen TV technology on-hand at the summit—Susi Elkins, director of broadcasting and general manager at WKAR Public Media in East Lansing, Mich., which launched Apollo PublicTV in December 2019.

“We see NextGen TV and the Apollo platform as one way for public broadcasters to truly become the digital transformation agents of their local communities and the catalyst for a collaborative national footprint enabling innovations around smart cities, precision agriculture, healthcare, public safety, just to name a few,” Elkins said during her presentation, which was part of the “Collaboration with National Partners on Spectrum Opportunities” panel.

“I hope that as public broadcasters, we will embrace our roots as innovators,” Elkins continued.

Other members of the Spectrum panel included John McCoskey, COO at SpectraRep; Molly Phillips, executive director and general manager for Iowa PBS; and Lieutenant General (Retired) Reynold N. Hoover of RNHoover Consulting. They discussed how datacasting and other technology related to ATSC 3.0 can help with public broadcasting needs. “The possibilities are limited to your own imagination,” said Hoover.

In addition to these sessions, APTS Public Media Summit handed out a pair of awards to public broadcasters. The 2020 Pillar of Public Service Award was given to Tom Axtell, general manager of Vegas PBS in Las Vegas, and the 2020 National Advocacy Award was given to Marty Ryall, director of external relations at Arkansas PBS.