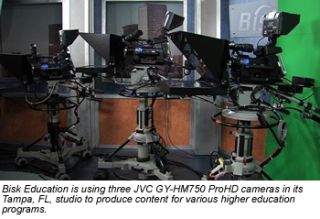 Bisk Education has added three JVC GY-HM750 ProHD cameras to its HD production studio in Tampa, FL, which is used to produce a variety of courses for higher education programs across the country.

A provider of online professional education, Bisk Education is an end-to-end systems provider that partners with a number of schools and universities to produce lectures and other coursework. Many college and university courses for degree programs are streamed on the Web, but other content is delivered on DVD, particularly certification and continuing education programs.

Paired with Canon lenses, the ProHD cameras are housed in JVC KA-790G studio sleds and mounted on Vinten pedestals. Each camera includes a JVC VF-HP790G studio viewfinder for the camera operator, along with a 22in prompter for the instructor. Mike Knight, chief engineer, said the studio has a fourth JVC camera, a GY-HM700, which matches up well with the new cameras.

While the new GY-HM750s are used primarily as studio cameras, Bisk also occasionally uses them in the field. “I think they’re way slick. You have this small camera that feels and performs like a full-size broadcast camera,” Knight explained. “As a group, many field shooters had literally refused to use these smaller cameras, and now it is quite the opposite. They love to get their hands on these smaller, lighter cameras that have the feel and performance of the larger cameras without the weight.”

Bisk used to be a D-9 house, but now captures native QuickTime files on AJA Ki Pro recorders. The GY-HM750’s native file recording of .MOV files, as well as its use of SDHC cards, were important features, he said.