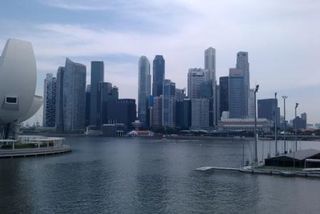 The BroadcastAsia 2012 International Conference will be held in Singapore from June 19–22. Located at Suntec in downtown Singapore, the show is being held concurrently with CommunicAsia, located a short shuttle bus ride away at Singapore’s Marina Bay Sands.

THE CONTEXT
The shows will happen in a market where the creation of content is a relatively mature area of the TV industry. HD digital cameras such as the Arri Alexa, RED and new models from Sony, Panasonic, JVC and Canon have become well-accepted tools of the trade. Meanwhile, film as a capture medium is fading fast; ably assisted by a dearth of competent laboratory services.

Broadcasting has moved rapidly onwards and outwards from the home TV set and is becoming more and more a multiscreen endeavour. Broadcasters are now driven to add value by customising content to specific audience interests and communicating with viewers across cell phone, tablet, DVR and time-shifting platforms. A recent Cisco report predicts that by 2016, there will be a global population of 10 billion smartphones and tablets. That's around 1.4 mobile gadgets per person!

Fighting back, the home television set is changing too, becoming a multi-purpose, ISP-linked communication tool. While 3D was hyped a year or two ago as a big trend, smart TVs are a more likely area of immediate interest for most consumers.

In a world with Facebook and Twitter competing for audience, broadcasters are searching for the ideal means to monetize content and maintain a presence. The business is no longer only about transmitting, but also about the interaction between content providers and consumers.

"At the top of broadcasters’ minds must be the divergence in the way audiences have to access the content,” says Chris Grey, head of creative content solutions at Sony Electronics Asia Pacific; “and how best to engage audiences across the four screens: TVs, PCs, tablets and mobile phones."

Beyond the ‘small screens’ another possible trend of some import is the emergence of hi-res, large screen options. Graham Stephens, CTO of Iskandar Malaysia Studios, predicts the emergence of hardware that can support economically affordable production at 1080p50/60 fps. Moreover, "The migration to 4K will give customers a more immersive viewing experience,” he says.

Confirmed exhibitors Axon, EVS, Seachange and Magna will feature prominently in a live special showcase of cloud broadcasting and over-the-top (OTT) television, where attendees will see advanced multiscreen technology and multi-package, live media delivery. The equipment will be supplied by Axon, EVS and Magna Systems, while Seachange and Sony Pictures Television Networks Asia will provide the content.

The Kayak platform powers the advances ‘under the hood’ of the upcoming version 2.0 of the Digital Rapids Transcode Manager software. Unlike workflow approaches that simply orchestrate between separate applications across multiple workflow stages, Kayak is built on a philosophy of granular modularity with technologies as components -- from media-specific functions like encoding, packaging and processing to business-oriented functionality such as analytics, automated intelligence and reporting. These workflow building blocks are warehoused in a catalogue of best-of-breed technologies and solutions from Digital Rapids and a broad array of third-party partners, creating an open ecosystem of easy-to-access technology.

Some talks to watch for: Danny Wilson, President & CEO, Pixelmetrix Corporation will be discussing OTT television. “Should the ongoing financial crisis in Europe spread to Asia, I expect operators’ plans for expansion to be further delayed,” Wilson tells TV Technology Asia/Pacific. “Already, Asian expansion of traditional television infrastructure is well behind original schedules. The current push for OTT television might put further pressure on the industry."

Jonathan Benartzi, CEO of LiveAsia TV, will review the value proposition of the hybrid platform. He will explain how broadcasters can aggregate all content on one platform for distribution to multiple platforms.

Discussions will be held on social media and its significance to broadcasting. Speakers will explore business models for monetising social media, technology for multiscreen, OTT and cloud broadcasting.

Cloud technologies are currently used to distribute video content to consumers in a number of scenarios. Vidya S Nath, Global Industry Manager at Frost & Sullivan will demonstrate how they can also be used effectively for professional video content production and management. Meanwhile, over at the CommunicAsia gathering speakers will address compelling issues including technology reviews of the various cloud platforms; strategies for migration, adoption and deployment; ROIs for different cloud implementations; mobile cloud content delivery models; and monetising mobile cloud opportunities.