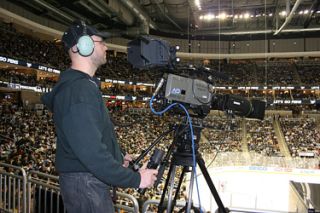 “Our guys go nonstop; there is no off-season for us,” says Chris DeVivo, director of media technology for the Pittsburgh Penguins. “We chose Ikegami because we needed cameras that would match our production team’s imagination and abilities. If someone is editing or compositing footage that was captured by our Ikegami HDK-77ECs or HDL-50, it looks as good as it came off of a network truck.”

In addition to providing live in-game video on the 18,087-seat arena’s 25-foot x 15-foot HD scoreboard, the Penguins produce a wide range of 1080i video content year-round, including promos, TV shows, advertising and B-roll, as well as supplying regional and national networks with footage. Given the opportunity to build an all-new production plant from the ground up with total 1080i workflow, DeVivo arranged a shootout to select the ideal camera for the facility.

“We did the test, and as soon as I saw the Ikegami, I said, ‘Whose camera is that?’ It stood out that much,” DeVivo says. “It just looks more real. The CMOS image processing helped to separate the HDK-77EC from the rest of the pack, right out of the box. The value made it an even easier choice. I couldn’t believe the picture I was getting from such a cost-effective camera.”

Since the Penguins’ debut in the CONSOL Energy Center, DeVivo has deployed Ikegami’s HDK-77EC portable docking-style dual-format HD cameras throughout the arena. The Ikegami HDL-50 one-piece “box” camera with 2.5 mega-pixel CMOS sensor provides an invaluable POV perspective shooting down at the ice from high above at the central scoreboard.

Ikegami’s HDL-50 employs three advanced 2/3-inch 2.5 mega-pixel CMOS imaging sensors; these provide native multiformat HD operation, including 1080/59.94i and 720/59.94p directly from the camera head. CMOS sensors include circuitry, which provides a digital video interface between the sensor and the camera’s DSP. This technology is very small with low-power consumption.