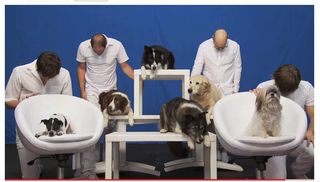 CYBERSPACE: OK Go, the band that cemented the role of treadmill choreography in music videos, has released its latest melodic visual. This time, the group goes low tech, recruiting a team of trained canines to join in their geeky robot dance.

One of OK Go’s previous video foray was a Steadicam, single-shot nonpareil of a warehouse-sized contraption of everyday items assembled to trigger one long chain reaction in time with the music. “This Too Shall Pass” was said to require 60 takes before the timing worked out properly. The “White Knuckle” dogs are quite tame by comparison.