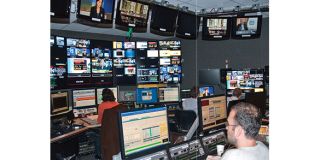 NEW YORK -- When New York’s NY1 24-hour news channel launched 20 years ago, the nation was preoccupied with a hotly contested presidential election, while Europe had just finished a successful Summer Games. In the two decades since, a lot of history has taken place in the nation’s largest media market, all documented on what is now considered the largest regional televised news media outlet in the country.

NY1 was conceived by Richard Aurelio, the president of Time Warner Cable’s New York City cable group, and launched Sept. 8, 1992. Among the headlines of the day was the aftermath of a U.S. Postal Building collapse that occurred in Manhattan. Luckily, NY1 news crews had covered the event in rehearsals before the channel’s official launch. “We had reporters there and nobody knew who we were and officials were sort of looking at us funny, like ‘who are you guys?,’” said Steve Paulus, senior vice president and general manager for NY1, and one of its founders.

DESIGNING THE LOOK
Officials would soon learn more about the fledgling network as it quickly ingratiated itself into the city’s media landscape. For the few regional news networks that existed in 1992, the concept of 24-hour news consisted of a taped hour of news, repeated continuously throughout the day. If news broke, anchors would have to break into the existing programming for live updates. Paulus found this method “inelegant.”

“Our goal was, ‘let’s try to minimize expense by recording content that we’re going to repeat, but still have the flexibility to go live when there’s breaking news,’” he said.

The solution was to create every story and rundown as a separate tape, played out on a Sony LMS1000. “There was no server-based playback technology back then, just a cart machine,” Paulus said.

Designing the look and schedule of NY1’s programming was just as important then as it is now. Story transitions “had to be as transparent as possible so when you’re watching it, you didn’t know it was prerecorded,” Paulus said. “After we launched, I would talk to folks in the industry and they all remarked ‘wow, it’s a really clean show.’ When I told them we pretty much recorded everything, they looked at me like, ‘you’re kidding.’ They had no idea.”

At its launch, NY1 had a total of 94 employees; today, including freelancers, the news staff has swelled to more than 300. The network counts about 1.6 million viewers in New York City and is seen across New York State as well as in cable systems in New Jersey, North Carolina and Florida. A Spanish-language version, NY1 Noticias, launched nine years ago with its own separate news staff. The network has its own mobile device apps, VOD channel and four 24-hour traffic channels. It’s currently developing a paywall site with premium content for Time Warner Cable subscribers.

GROUNDBREAKING TECHNOLOGY
A pioneer in the field of newsgathering, NY1 was among the first stations in a major market to develop the concept of “one-man-band” journalists. The early ’90s was a time of shrinking news cameras, fueled by the development of the new formats such as Sony’s Hi-8.

“The reporter as the shooter—we were the first station in New York to do it,” said Joe Truncale, group vice president of operations, TWC, local news and programming. “We started shooting on Hi-8 cameras and migrated to [Panasonic’s] DVCPRO, which was like moving from the horse and cart to a Lamborghini.” NY1 was the first station to launch DVCPRO in the United States in 1996, Truncale added.

NY1 was also the first customer to use Panasonic P2, rolling out the solid-state format in 2004. John Baisley, executive vice president with Panasonic System Communications Company of North America, acknowledged NY1’s role in the format’s development. “A flagship DVCPRO customer, NY1 gave us invaluable input in the development of P2,” Baisley said. “Indeed, NY1 became the very first customer for the format, and showcased the P2 workflow at the 2004 Republican National Convention in New York. NY1, with its nimble, urban ethos, was the perfect proving ground for tapeless, solid-state field production.”

The network’s transition to a file-based workflow started several years earlier with its move to the Chelsea Market building in 2002. The first incarnation of this new infrastructure consisted of Omnibus automation, ENPS newsroom, Pinnacle Vortex and Vertigo graphics.

The system went through a second upgrade in 2009 and is now based on P2 edited on Apple Final Cut Pro and Dalet, stored on Omneon servers in a Dalet news automation/media asset management environment. As for ENG, Truncale said they’re currently testing Dejero’s IP-based platform to do live shots from an iPhone, for example. “Whenever we can, we try to push the envelope,” he said. “I think people expect it of us.”

In New York, NY1 is currently upconverting its signal to 16:9 HD, but Truncale said the network hopes to begin transitioning all of the news channels to hi-def in 2013.

ALL NEW YORK
As a prominent news outlet in New York, NY1 reflects the people and moods of the city and at no time was this more evident than on 9/11.

“It was clearly the watershed experience for all of us,” Paulus said. “We stayed on the air for two weeks without a commercial, continuously live. When [then Mayor] Rudy Giuliani left the building he had taken refuge in, his first phone call was to the White House and his second call was a live interview on NY1.”

Paulus admits that Giuliani is not NY1’s biggest fan, however. NY1’s relationship with the city’s pols has resulted in run-ins over the years, he said. “[Former Mayor David] Dinkins blamed us for losing the election and Guiliani blamed us for almost not winning the election,” Paulus said. Acknowledging the fact that NY1 is not out to win accolades from the local officials, he said, “clearly we must be doing something right.”