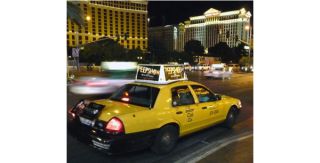 LAS VEGAS: Cab drivers in Las Vegas hit the brakes on a plan to put more taxis on the streets during the National Association of Broadcasters Show next week. Local media outlets are reporting that cabbies convinced two of four Taxi Cab Authority commissioners to reject the proposal by cab companies at a meeting last night. The tie meant no action could be taken, according to the Las Vegas Journal Review.

The Review said more than 200 cab drivers showed up at the meeting to reject company requests for temporary permits to cover NAB. The cab companies wanted to add between six and 12 extra drivers during the show, which starts this weekend at the Las Vegas Convention Center and runs through next Friday. Around 100,000 people are expected to attend.

The vote over issuing temporary medallions was split among four commissioners. A fifth had left to attend a previously scheduled meeting, leaving the vote in a 2-2 tie.

The drivers objected because they say there’s already too many cabs on the streets of Las Vegas, according to KTNV, the local ABC affiliate. Just one of the 16 companies licensed to provide taxi service in the city sided with the drivers. Bill Shranko of Yellow Checker Star Cab told KTNV that, “even if they had less medallions, they would be able to service this convention.” Shranko’s concern is employee retention. The Review said Yellow Checker Star had previously reported 60 percent turnover a year. He told the Review that holding the medallion count at current levels was an “excellent step in retaining drivers.”

The NAB vote marks the second win for cabbies since February, when more than 300 of them shouted down a similar proposal for March Madness and a NASCAR race at the Las Vegas Motor Speedway, according to Vegas Inc. Three commissioners voted to reject the requests for more vehicles, with the exception of three for race day only. Around 100,000 people were expected for the NASCAR event.

While most anyone who’s attended NAB has waited for a cab, the problem for cabbies is timing. NAB crowds move en masse mostly as the show opens and closes for the day. Cabbies say lines of taxis are idle the rest of the day.

Free shuttle bus service is employed at the Convention Center to relieve some of the congestion. Buses run every 20 minutes from 7 to 10:30 a.m., and 3:30 to 7 p.m., Monday, April 16, through Thursday, April 19—the dates that the exhibit floor is open. There’s also the Monorail, which runs between the Sahara and MGM Grand. Trains will run from 7 to 2 a.m. Monday through Thursday, and 7 to 3 a.m. Friday through Sunday.
~ Deborah D. McAdams