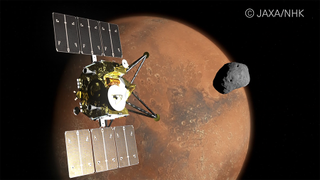 TOKYO—Get ready to see Mars in 8K, as Japanese broadcaster NHK and the Japanese Aerospace Exploration Agency (JAXA) are collaborating on a “Super Hi-Vision Camera” that would shoot 4K and 8K images of JAXA’s Martian Moons eXploration (MMX) mission. JAXA claims that this would be the first time 8K images of Mars and its moons would be taken in close proximity.

The camera is meant to capture UHD images and broadcast them widely with cooperation from JAXA. The images will be taken at regular intervals and partially transmitted to Earth to create a smooth image. The original image data is planned to be stored in a recording device in MMX’s return capsule.

JAXA and NHK have collaborated on different projects dating back to 1992 when it conducted a live broadcast from a space shuttle. This collaboration’s goal is to visualize the actual behavior of the spacecraft with the Super Hi-Vision Camera, combining 4K/8K images with MMX’s flight data. These can also be used for the operation of the spacecraft, JAXA says.

“JAXA and NHK will work together to convey the appeal of a new horizon that has never been seen in detail before, to many people in a vivid and inspiring way,” said JAXA in the announcement.