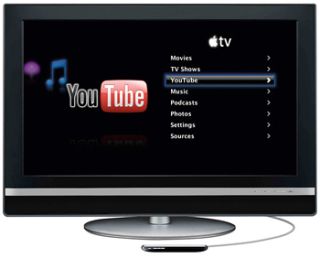 Apple (or at least its fans) may be a bit preoccupied right now with the early days of the iPad and the next-gen version of the iPhone on the near horizon, but according to at least one credible Web site, the next version of Apple TV will cause some heads to turn, too. And when those heads turn, one of the things they'll be viewing is Apple TV-enabled 1080p content.

The new design of the next Apple TV device, which feeds content from a computer and other venues to a regular HDTV set, will be based largely on the next version of iPhone due out later this month, according to Apply-savvy sources cited by Engadget.

The next Apple TV will likely be capable of securing 1080p video.

The device also may be smaller than its original version — maybe as small as today's iPhone (but without a screen). And the new Apple TV will not contain much storage capacity (16Gb or less) since the emphasis will be more on instant SD/HD streaming and rely a lot more on cloud storage. The sources said the new system also will drop the current "lite" version of the OS-X operating system, in favor of the iPhone OS.

Apple, for its part, has not yet confirmed any details of its new Apple TV. But one final detail from Engadget's usually reliable sources may be the best of all in a strapped economy: The new Apple TV device could have a price-point under $100.