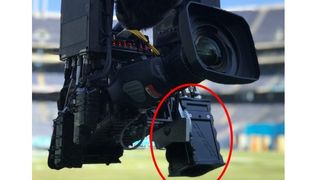 STAMFORD, Conn.—A new season of NBC’s “Sunday Night Football” will bring a fresh perspective to the game broadcasts, as NBC Sports has announced that a new camera has been added to the production.

The C360 camera, which will be attached to the production’s SkyCam, is primed to present new overhead looks and replay angles, as well as the ability to focus on individual players. NBC Sports claims that this is the first time an immersive overhead replay experience will be available for an NFL broadcast.

The C360 camera shoots in 8K and records in a 180-degree immersive field of view. This, according to NBC Sports, enables them to go back and reframe a play to provide a more definitive angle. Operators can also freeze the shoot and zoom and pan to look at different components of the play.

NBC has previously used the C360 camera for NASCAR races, as well as having embedded them in line-to-gain pylons and first-down markers during the 2019-2020 NFL season.

“We’re thrilled to be working with NBC Sports and to provide this novel immersive capability,” said Evan Wimer, co-founder of C360 Technologies. “As a secondary camera on Skycam, we anticipate capturing a fresh perspective of the game over the trenches.”

NBC will debut the camera angle with the NFL Kickoff Game between the Super Bowl champion Kansas City Chiefs and the Houston Texans on Sept. 10. The camera will be used throughout the “Sunday Night Football” season.