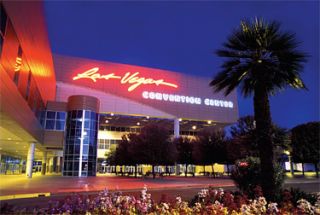 To get around the mega-event effectively—i.e., to see what you want to see while not dying of exhaustion on the LVCC floor—requires real “survival skills.” These can be learned from people who attend the event annually, and have lived to pass on their wisdom.

The Las Vegas Convention Center, home to the annual NAB Show TV Technology canvassed far and wide for their learned advice. Here’s what they told us, in the form of rules for surviving the NAB Show.

RULE #1: PLAN YOUR TIME ON THE SHOW FLOOR

Broadcasters and vendors agree: The NAB Show is too big to wander around without having a plan. “For example, if you need a new camcorder and portable lighting kit, make sure you know which exhibitors have those products,” says Mark Pescatore, vice president of PR firm Pipeline Communications and a regular NAB attendee. “There’s nothing wrong with a little window shopping, but only after you’ve finished addressing the items on your predetermined shopping list.”

Frank Governale vice president of operations at CBS News touts the value of proximity. “I try to set aside specific days for each hall—South, Central, North—and make sure to schedule adjacent meetings as close to the previous booth as possible,” he said. “[There’s] nothing worse than having to traverse the convention center, or hall, numerous times a day. I also try and leave the last hour of each day as ‘swing time,’ to visit the smaller, unknown vendors. Sometimes that hour is the most profitable.”

Resist the temptation to make too many appointments, warns Peter A. Sockett, director of engineering operations at WRAL/WILM in Raleigh, NC. “I can never seem to make it to appointments on time, or the sales man I had an appointment with is always tied up with the appointment before me,” he explains. “Therefore, a few years back, I started committing one day per floor, and I make only one-two appointments—about pressing decisions—per day.”

Getting around an NAB convention requires more walking than most attendees get in a month. As a result, all NAB veterans agree that comfortable shoes are a must. “I wear soft leather shoes called Nunn Bush Cameron that look like dress shoes but are really sneakers,” says Fred Lass, director of engineering at WRGB Albany, NY. He even passed along a website: www.shoestation.com.

Frank Governale, vice president of operations, CBS News Speaking of shoes, “Real NAB pros will pack several pair and rotate from day to day,” says Gerry Belec, director of technology and design, Global News (Canada). “If you get a chance to sit at a presentation, take advantage of it. Don’t take your shoes off in the demo suites—ever.”

As for clothing: “Wear business attire in order to take advantage of the fact that a sales rep will talk to a smartly dressed engineer before they approach a floor walker in jeans,” Lass advises.

NAB exhibitors offer all sorts of goodies to draw you to their booths. Add literature and the bags to carry all this swag in, and you can end up looking (and feeling) like an overloaded pack mule.

The pros advise against this: “You should avoid taking literature and tschotskes that you don’t need or won’t use,” says Pescatore. “Believe me, those bags can start feeling heavy pretty quickly.”

Instead, use the swipe card that comes with your delegate identification to have vendors send you informational material. “I use the swipe card religiously and make sure the vendor sends me anything I was interested in,” says Sockett. “My motto is ‘carry nothing, other than my Blackberry/cell phone,’” agrees Governale. “Any literature I want, I have mailed back to the office.”

As for promotional goodies? “Only accept swag that fits in your pocket and stuff you can really use,” Belec says. “I’m looking for a 32 GB Jump drive this year [hint , hint].”

Just getting around the NAB show floor is time-consuming. Add in all the worthwhile sessions (and parties) that take place, and you can be run off your feet before the first day is done.

Again, the key is to preplan what you want to attend, and what you can afford to miss. “This is a tough one,” says Governale. “I have the advantage of picking and choosing sessions that deal with my most pressing concerns, and getting briefed by others at sessions I’m unable to attend.”

Exhibits at the NAB Show occupy more than 1 million square feet of space. “I only go to sessions that can’t be understood by buying the book,” Lass adds. “That gives me more floor time.”

However you plan your sessions, “Stick to your agenda,” urges Belec. “You’re not doing anyone any favors by sitting in sessions or demos that don’t meet your requirements.”

RULE #5: VEGAS IS BIG, SO BE PREPARED

Things are really big in Las Vegas. This means that buildings are often further than they appear to be on the street. “I once tried walking from the Las Vegas Convention Center to Caesar’s Palace,” says Governale. “Not only was it much further than it looked, it took me so long that I almost missed the meeting/dinner I was attending.”

When in doubt, take a shuttle bus or cab. “If a taxi line at the Convention Center is too long, find five others going to the same place or nearby and rent a limo,” says Lass. You’ll be going in style, while being thrifty and saving your feet for the show floor.

Arriving at Vegas at 1:30 a.m. and then pub-crawling the Strip until well past sunrise (which this reporter did on his first NAB convention) is just not smart. To survive NAB, you will need to get lots of sleep and pace yourself.

“Slow and steady is the name of the game,” says Governale. “I keep the partying to a minimum, just to be social. If I have a couple of drinks at dinner or afterwards I make sure I take two aspirins—not Tylenol or Advil—and never have a morning-after problem. Staying up late is all relative, but on most nights I’m back in my room by 11 p.m. -12 a.m.”

A FEW LAST WORDS OF ADVICE

Make no mistake: The annual NAB convention is truly a great event. Manage your time here intelligently, and the money you paid will be well worth it.

But remember, you are in Vegas, so set aside some time to look around. “A favorite destination for me is Lawry’s The Prime Rib (there are only four in the United States), which is not far from the Strip,” says Pescatore. “If you can add an extra day to your itinerary, I suggest a visit to Hoover Dam or Red Rock Canyon.”

To keep your experience here pleasant, “Avoid the street corners where people hand out pamphlets,” says Governale. “The bathrooms in the LVCC can get pretty rank by mid-afternoon,” adds Belec. “C’mon people, wash your hands. You’re wearing a name tag. We know who you are.”