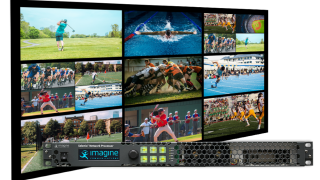 WASHINGTON—The explosion in content availability spurred by the OTT revolution over the past decade has only made the monitoring of such content more challenging. Mix in new concerns over social distancing and the increased demand for remote productions in less than ideal environments and it’s no wonder that production staff are looking for simple, fast responsive solutions.

Developments in multiviewers have been spurred on by ever-expanding screen sizes, higher resolutions and, perhaps most importantly, the industry’s move to the cloud and IP. However, adding or altering the pathways from signal to monitor can introduce new concerns that can negatively impact the production workflow.

Top of the list of concerns is ensuring production staff can get a reliable, low-latency multiviewer signal, regardless of whether they’re in a master control facility, OB truck or their basement, according to TAG’s Zer0 Friction Officer Kevin Joyce.

“Remote production and the ability to view their facilities and the streams in their homes of course has become the number one priority,” he said. “In a multiviewer, you have to be able to work in every single environment. And by environment, I mean across all four of the primary broadcast applications: live production, playout, delivery, and OTT.

“If you’re going to work across those four applications, your multiviewer has to have quite a lot of features to be the best in class across all four of those, where the multiviewer for live production has to be super-high resolution. And it has to be very low latency,” Joyce added.

Joyce describes TAG multiviewers as the “Swiss Army Knife” of multiviewers because of the product’s ability to handle a vast array of formats in uncompressed and compressed mode, plus the ability to analyze the signals.

“Customers are demanding more and more probing capabilities for us to detect more and more errors as different types of formats go into the different applications,” Joyce said. “A multiviewer needs to do more than just be able to visualize the errors. If you could actually detect the errors, then you get a ‘bigger bang for your buck,’ using probing and visualization.”

Expanded support for industry standards, along with “extreme” low latency are among the new enhancements in the company’s multiviewers, according to Joyce.

“And we’ve increased the density of our system by 50% in the last six months,” he added.

“Our latest crop of multiviewers are based on our Selenio Network Processors [SNP], so they’re really designed around the sort of low-latency, high-touch production—people who historically were very fussy about latency. Now whether that fussiness is still there—in the post COVID world, will they have realized that maybe a little latency didn’t hurt anybody—we’ll see,” he said.

In the early days of higher resolution displays, if a customer wanted to use a UHD signal for example in their multiviewer, they had to deal with a trade-off in capacity, according to Mailhot.

“So one of the things we really focused on in the SNP MV was just making all the displays rendered in UHD to begin with,” he said. “So every display is done in UHD and then we make an HD version of it if you need that. But we’ve sort of sized and scaled and built the whole product around creating UHD displays.”

The ability to monitor HDR is also on the customer’s wishlist as well, Mailhot said.

“We deal with HDR in a very intelligent way—you can choose whether to display it and you can pick whether it’s HLG or PQ or SLog3, of course. But then equally each of the inputs then gets harmonized into that format so that if you have an HDR production, maybe the TD wants to really see his stuff in HDR, but maybe for the replay operator who’s close to the screen, pushing HDR into their eyeballs from that distance isn’t such a good idea. “So you want to have SDR for some people on the truck and HDR for others,” he said. “And so that was a key design driver for the SNP MV.”

With live sports now returning to the screen, Cobalt Digital has seen increasing demand for its multiviewer products, according to Chris Shaw, executive vice president of sales and marketing.

“We are seeing this market move forward, both in government and in the sports truck environment,” he said.

For 2020, Cobalt has added numerous features to its 9971-MV18-4K Multiviewer, including support for timecode burn for each PiP as well as multilanguage capabilities. The industry’s demand for UHD multiviewing solutions is helping drive new developments for Cobalt’s multiviewers.

“4K production is here, and broadcasters and OB truck operators need to be able to monitor content at a glance,” said Shaw. “Not only does the 9971 Series support full UHD resolution, it can handle multiple asynchronous signals simultaneously and provide full resolution display on consumer 4K monitors. It’s an uncomplicated multiviewer solution for facilities with a complicated blend of HD and 4K sources.”

There are also plans to add ST2110 support in the near future.

“With the hardware that we’re scheduled to roll out at some point next year, our existing multiviewer will be expanded to support ST2110 on all inputs and have the output as well,” said Kyle Wilken, vice president of firmware for Cobalt Digital.

Lawo’s vm_dmv is a virtual module app for the company’s V__matrix IP routing & processing platform, complementing the existing vm_mv16-4, vm_mv18-4 and vm_mv24-4 multiviewer lineup. It turns the V__matrix C100 software-defined processing blade into a distributed, flexibly expandable, true IP multiviewer. The vm_dmv is based on a distributed architecture where multiple modules network together. These modules could be hosted together in the same V__matrix frame, in different frames or even at different geographical locations. Basically anywhere as long as they are networked together via IP.

As a relatively recent entrant into this sector, Lawo had the advantage of approaching it through the lens of all-IP, according to Stephan Türkay, senior product manager, media infrastructure at the company. Providing that offering as part of the company’s V__matrix platform allowed for a more integrated product, he added.

“Our customers coming from the baseband world are used to thinking in terms of compartmentalized multiviewer and routing solutions, which may very well be standalone offerings purchased from vendors that focus on a specific application,” Türkay said. “The move towards IP turns the overall infrastructure into a tightly integrated system with one-stop, intuitive control over switching, routing and multiviewing. In addition, virtualizing multiviewers not only expands the control and viewing options—it also allows operators to use idle resources for other processing tasks at short notice. People can do more with less by scaling up and down without adding or disconnecting physical units.”

Grass Valley has been concentrating on latency and IP for its Kaleido multiviewer product line, according to Martin Jolicoeur, director of product management for the company.

“We’re working on making processing latency on par with purpose-built FPGA-based hardware,” he said. “Obviously processing latency is important for live production staff when they’re making decisions. Another new thing is that we’re providing the ability to process up to 64 HD sources on a single server running Kaledio IP software, where considering the bandwidths of uncompressed signal formats, it’s pretty amazing.”

“This multiviewer offers low bit rate, low latency streaming, which accommodates for live remote production,” Jolicoeur said. ”It includes ‘intelligent timing’ which compensates for the different streaming latencies you can have from the venue to the control room or even your home office.”

Recent changes in remote production mean customers are streaming multiviewer signals to new and more locations, adding stress to latency, according to Jolicoeur.