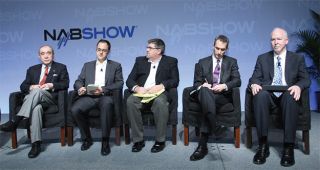 The massive March earthquake and tsunami in Japan was described multiple times as a wake-up call at the "Emergency Alert with Mobile DTV" panel at the 2011 NAB Show. The panel was organized by the Mobile500 Alliance, a group of more than 70 broadcast stations promoting the Mobile DTV rollout in the U.S. John Lawson, who heads up the organization, moderated the panel.

Japan has a successful Mobile DTV system, and it played an active role in informing and warning Japanese citizens during the crisis and its aftermath.

Lessons from the March earthquake and tsunami in Japan augmented the discussion of Mobile DTV and emergency situations.
Hideichi Tamegaya, professor at the Joshibi University of Art and Design Graduate School, was on a train underground in Tokyo when the quake hit, so he didn't see the damage happening at the surface. An hour or so later, the train made it to the station and he came out to the Tokyo streets, and was able to watch NHK on his phone.

He said the description of the quake did not help him accurately understand how severe the damage was. "I was able to watch the tsunami waves live on the screen. I could not imagine how big it was until I watched it."

Claude Seyrat, vice president for marketing and strategy at Expway, was also in Japan when the earthquake happened. "I was in a meeting with a customer and then I heard a noise and I could see the worry in everybody's eyes. My customer opened his phone and looked at it, and said let's get under the table."

Those stories and others tell the critical role that Japan's Mobile DTV service played in warning the Japanese public. Kerry Oslund, corporate vice president for Digital Media at Schurz Communications pointed out that over half of Japan's cell phone towers went down during the disaster. "No broadcasters were knocked out."

An additional advantage broadcast has is that it scales one-to-many, where having thousands of individuals trying to stream video over even a healthy cell phone carrier will not be successful.

Robert Dunlop, executive vice president of operations at Fisher Communications, pointed out that its television stations in Seattle and Portland, Ore., lie along the Cascadia subduction zone, "essentially a geologic copycat of the fault line that impacted Japan. We thought very carefully about how prepared we were for a similar event to impact our marketplace."

One point he made is that in a disaster of that scale, competing stations will need to cooperate.

John McCoskey, chief technology officer for PBS, noted that PBS and its member stations have been very active in emergency work for a long time. He announced PBS' Landmark Next-Generation Emergency Alert System Pilot Project to Use Mobile Digital TV.

"We're going to be working with a small number of public television stations on highway emergency alerting, using these new techniques," he said.

In answer to a question of what it would take to make the American public take the chance of an American disaster seriously, Oslund replied: "Unfortunately, it might take a disaster stateside for us to move more swiftly. We would like to learn from Japan, and be ready, even though perhaps there is not a great amount of passion on the street about it." © 2011 NAB