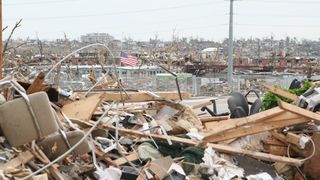 The devastating EF5 tornado that struck Joplin, MO, in May 2011, killing 161 people and doing property damage valued in the billions, underscores the urgent need for broadcast meteorologists to be a “back stop” for the National Weather Service, according to Mike Smith, Senior VP/Chief Innovation Executive at AccuWeather Enterprise Solutions.

Smith, who authored “When the Sirens Were Silent,” a book that explores why so many people were killed by the Joplin tornado, last week called on the American Meteorological Society to beef up its Certified Broadcast Meteorology Program by adding a greater emphasis on training broadcast meteorologists to handle extreme weather during a presentation at the society’s annual meeting in Austin, TX.

Back stopping the National Weather Service with accurate reporting on the track of the deadly twister may have reduced the loss of life in Joplin, he said. Inaccurate and misleading warnings from the National Weather Service about where the tornado was headed led Joplin broadcasters to miss the imminent danger confronting the southwestern-Missouri town till it was too late to warn viewers.

“We need to be emphasizing handling severe weather for broadcast meteorologist,” Smith said in a telephone interview with Broadcast Engineering. “Neither the American Meteorological Society nor the National Weather Association have a great deal of emphasis on tornado interpretation.”

Smith, who sold his Wichita, KS, based Weather Data Inc. to AccuWeather in 2006 and was a TV meteorologist for 22 years, said that with greater skills in interpreting tornados television meteorologists will be better equipped to recognize when the National Weather Service makes a mistake and base reports on their own interpretations of weather data, not simply weather bulletins.

To illustrate the importance of having these skills, Smith compared the Joplin tornado to an EF4 twister that struck Hoisington, KS, in April 2001. That tornado, which destroyed the tiny central Kansas town, killed one person and injured 26.

“With the Hoisington tornado, the National Weather Service had a computer failure and didn’t realize that the computer wasn’t updating properly and didn’t issue a tornado warning till it was too late,” said Smith. However, unlike Joplin, the television stations in Wichita have full meteorology staffs of four per station, he explained. “All of the Wichita stations went on air with their own tornado warnings for Hoisington, and many people said they got the warning and took shelter because of the broadcasters,” said Smith.

According to Smith, who has investigated all aspects of the Joplin tornado, KOAM-TV, the CBS affiliate, figured out the inaccuracies of the National Weather Service data shortly before the tornado struck Joplin and began warning viewers of the immediate danger they faced. KSNF-TV, the NBC affiliate in Joplin, began warning viewers of the danger when on-air talent saw the tornado bearing down on the station in video shot from the station’s tower-cam.

To be sure, other factors, such as overuse of the town’s emergency warning sirens, also contributed to residents of Joplin not being prepared for the tornado, said Smith. However, with a greater emphasis on interpreting severe weather added to the AMS certification program, Smith said he is hopeful television meteorologists around the country will be better equipped to make their own call and warn viewers of severe weather even if the National Weather Service issues inaccurate bulletins.