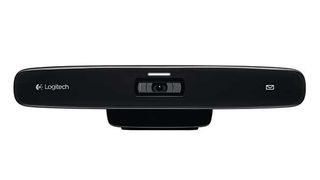 Logitech and Skype have announced the Logitech TV Cam HD, a high-definition TV camera with a built-in Skype capability that operates on any HDTV set with an HDMI input. The device turns the TV set into an HD Skype video telephone that can be used for standard calling or for social media interplay while watching television.

With Skype built-in and using Wi-Fi or Ethernet connectivity with the HDTV set, there is no additional software or computer required. Using a bundled remote controller, the Logitech TV Cam HD allows users to call anyone using Skype on any platform, whether they are on their smart phone, tablet HDTV or computer.

The user signs into Skype with an existing Skype name or creates a new account on the HDTV set. The device can call landline or mobile numbers using the account’s Skype credit or calling subscription.

“Because of the size of the TV screen and the quality of the video, the new Logitech TV Cam HD with Skype brings a whole new social element to the living room,” said Joerg Tewes, vice president of Logitech’s digital home business group. “It’s a transformative experience.”

The Logitech TV Cam HD, priced at $199, offers a wide-angle, zoom-capable lens developed in conjunction with the German optics specialist Carl Zeiss that displays a wide shot during the video call even in low light. This is compared to tighter shots using a regular computer webcam.

The Logitech TV Cam HD features a built-in ringer so users will know of callers whether the TV is on or off.