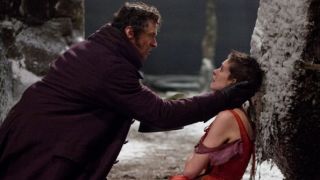 For decades, Hollywood directors have been trying to transition Broadway spectacles to the screen, with mixed success. “West Side Story,” “Guys and Dolls,” and “Nine” all had passionate advocates and strident critics. The newest entry in this field is Tom Hooper’s take on the hugely popular stage spectacle, “Les Misérables.”

A winner of three 2013 Golden Globe awards for the screen version, the musical adaption of Victor Hugo’s novel, as everyone knows, enjoyed a phenomenal run on Broadway. The production, which featured music by Claude-Michel Schönberg, French lyrics by Alain Boublil and an English-language libretto written by Herbert Kretzmer, ran for more than 15 years on the Great White Way.

The big screen makes it hard for actors to convincingly mouth vocal performances to tracks that have been previously recorded, whether by them or professional singers. Recall, if you will, Natalie Wood’s valiant but ultimately vain effort to put across her version of Marni Nixon’s performances of the arias Maria sings in “West Side Story.”

To avoid this pitfall, Hooper had his actors, including Hugh Jackman and Anne Hathaway, sing their tracks live on set. Working to pre-recorded piano accompaniments that were later replaced by an orchestra, Hooper was content to trade off vocal perfection (which can be achieved through the arduous process of punching in phrases and individual notes) for the realism that comes when an actor’s vocal performance emerges from the scene as it’s played.

Production sound mixer Simon Hayes, tasked with capturing the audio for “Les Misérables,” had many choices when it came time to select the lavaliere microphones that would be used in this production. Ultimately, he selected DPA 4071 mics.

“When judging different lavalieres, I had always considered the differences in sound between various brands of lavaliere to be a matter of taste, rather than a clear-cut situation of one brand being superior,” Hayes said. “That was until I listened to a DPA up against the competition.In my opinion the DPA is better, more open sounding, less chesty and sounds more like a boom mic than any other lavalieres I have heard.”

Hayes had 50 DPA 4071 lavaliere microphones at his disposal during the filming of Les Misérables, all of which were supplied by Richmond Films in conjunction with DPA’s UK distributor Sound Network.

“Normally when I am recording a film I prioritize boom mics, especially if the scene is being shot with a single camera,” Hayes said. “But with Les Misérables, Tom [Hooper] wanted all the angles covered from all sides to capture the perfect performance. This meant we couldn’t rely so heavily on the booms because the wider angle coverage would stop them getting close enough.

"Our solution was to come at the recording from a different angle, and make lavaliere microphones our priority.”

Abbey Road engineers checked the sound quality of the DPA 4071 lavalieres to make sure they were the best choice for vocals.

“We tested various models and found the DPAs were clearly the best,” Hayes said. “In fact, nothing else came close. The sound quality, frequency response and dynamic range were easily good enough to master, and they were able to handle very high SPL levels from vocals without sounding harsh as they approach their maximum SPL.

"I have never heard a vocal make them square off, yet such is their dynamic range and sensitivity that they can faithfully reproduce even the smallest ‘breathed’ vocal.”