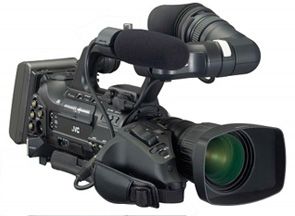 JVC GY-HM700
JVC Professional Products Co., a division of JVC Americas Corp., has announced that Little Rock’s KLRT-TV has acquired JVC ProHD cameras for both studio and ENG applications. The station purchased four JVC GY-HD250s to serve as its main studio cameras, along with eight GY-HM700Us for use in the field.

KLRT-TV has been using the ENG models since August and placed the HD studio cameras in service for the first time last week. The station is owned by Newport Television and is the Fox Affiliate for the Little Rock-Pine Ark. Television market.