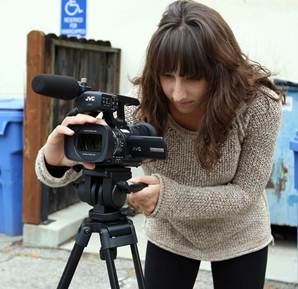 The school has acquired 10 GY-HM150 ProHD handheld camcorders, which students are using for coursework as part of the university’s hands-on educational philosophy.

“We chose JVC for several reasons, including the compact design that doesn't give up any picture quality,” said Richard Gearhart, a professor and news anchor at the local NBC affiliate KSBY, said.

“This partnership with JVC enables us to educate students using equipment that they will encounter in the journalism profession when they enter it,” said Harvey Levenson, interim chair of the journalism department and head of the graphic communication department.

Cal Poly already owns other tapeless camera systems, but Gearhart prefers JVC’s use of non-proprietary SDHC and SXHC media cards. “The ability for students to easily go to any electronics or even drug store to buy additional cards is really, really helpful,” he said. “In addition, the ability to remove and replace cards without stopping the camera is a very impressive feature.”

“Commercial news operations are using tapeless formats, so we need to have our students learn what is standard in the industry. With these cameras, we can now conduct our advanced broadcast news production class utilizing an entirely tape-free system,” Gearhart said. “Using the cameras for classes and on-campus video projects will give the students a big advantage in the job market.”